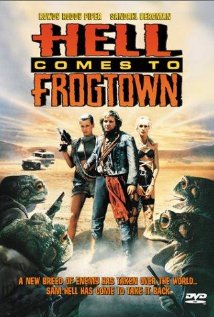 Yes horror fans I just reviewed Donald G Jackson's 1985 cult classic HELL COMES TO FROGTOWN starring former WWF wrestling superstar Rowdy Roddy Piper! The DVD I reviewed was the Anchor Bay edition, which includes the film's theatrical trailer, presented in the widescreen format, and contains an audio commentary with Jackson and screenwriter Randall Frakes. Jackson died from leukemia on October 20 2003, so this commentary was one of the last ones he ever did. Anchor Bay let go several of their horror titles last year and were picked up by Image Entertainment, however these reissues do not contain any the extras found on the AB editions. So click here to read my review and if your interested in purchasing the AB edition, buy it now because these are now out of print!

Thanks for reading, and enjoy the show!
Posted by Philip Castor at 6:25 PM