Phil gets an exclusive interview while attending the midnight sceening of THE ROCKY HORROR PICTURE SHOW at the Camera 3-January 7, 2012 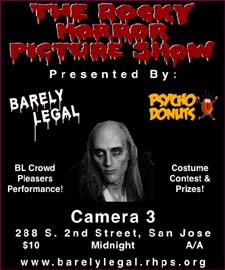 This past Saturday night I did the Time Warp again over at the midnight screening of THE ROCKY HORROR PICTURE SHOW at the Camera 3 in Downtown San Jose! As I mentioned in my October review, if you have never been to a midnight show of ROCKY, then my friends you are missing out on a lot of fun! The show is presented by The Camera 3 Cinemas and by Psycho Donuts and it features the cast of Barely Legal Productions, who have been carrying the ROCKY torch here in the Bay Area for the past 16 years. These events have been so popular that they are now having shows twice a month: the first and third Saturday!

What a way to ring in the new year with a midnight screening of ROCKY, which was Barely Legal's first show for 2012. The cast and crew once again did a wonderful job! Every time I attend these shows, the crowds get bigger and bigger, plus more and more "virgins" are attending these shows, which means the ROCKY virus is spreading to a whole new generation of kids. This makes me very happy, because it means that this midnight tradition, and the film, will be entertaining people for years to come. This is their mission: to keep the legacy of THE ROCKY HORROR PICTURE SHOW alive and well, and to make sure audiences have the best time of their lives at their shows. I always have a blast, and all my friends that I've been taking have all had fun and all have come back several times over.

I had the honor and privileged to conduct an interview with two of the main actors of the Barely Legal show. Nate and Bridgid McHavoc (who just got married late last year) are what I like to call the "power couple" behind the BLP. They have been part of Barley Legal since its inception. But for Bridgid, who portrayed the infamous sweet transvestite Dr, Frank-N-Furter at Saturday's show, her involvement with the film started years earlier. "When I was dating Nate years ago, he would have ROCKY HORROR parties at his place. That's when I saw the film for the first time really." However while they were dating, "We would go out to dinner or whatever and he would leave at 10:30pm to go with his friends to see ROCKY at midnight, and I got tired of being left behind. So I told him that next time he was going that he had to take me too," Bridgid said laughingly.

The first shows that Barely Legal held were at the famous UC Theater in Bekerley every Saturday night until the theater closed its doors in 1997 "After the theater closed we began to put on shows at the Parkway Theater in Oakland, " said Nate, still in his Riff Raff costume, minus the bald cap. "The crowds at those shows were incredible." The Barely Legal cast performed at the Parkway Theater for well over a decade until, like the UC Theater, it closed in 2008. "That was a real shame because we had so much fun there," said Bridgid.

With the closing of the Parkway Theater, the BL crew went on the road, having shows in San Francisco, Peteluma, and other cities before settling in at the Albany Theater in Albany and at the Camera 3 here in San Jose. It had been a long time since San Jose had midnight ROCKY screenings due to the closing of the Camera One back in 1995. For this movie fanatic, I was so happy to see it return to San Jose and back at the Camera Cinemas once again.

Nate and Bridgid live all the way up in Tracy, which by itself is a long commute. Add to the fact that both have full time jobs. Bridgid is an executive assistant at American Pacific Mortgage and Nate, "works a lot." But despite their hectic schedules, they are committed to their ROCKY fans and their passion in keeping the film alive and making sure their audiences have the best time of the lives at their shows. So to Nate, Bridgid, and to the rest of the Barely Legal crew, I would like to say "thank you" for bringing ROCKY back to San Jose, to the Camera Cinemas, and for making me forget my troubles for a while and letting me do the Time Warp once again. You guys are the best! 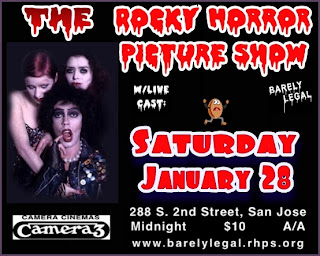 As I stated earlier, Barely Legal will be having two shows now every month. The next show will be on Saturday, January 28th so mark that date on your calender! If you would like to learn more about them and are interested in joining their cast, visit their cool website at http://barelylegal.rhps.org/. Also look for them on Facebook as well and to see showtimes, visit the Camera Cinemas website at www.cameracinemas.com. So what are you waiting for? Come out next Saturday and join in on all this ROCKY HORROR fun! You'll be glad you did!

Thanks for reading, and enjoy the show!
Posted by Philip Castor at 8:54 PM