Phil sees THE PERKS OF BEING A WALLFLOWER at the Camera 7 Pruneyard Campbell-November 10, 2012

It's been a very long time since I ventured out to theCamera 7 in the Pruneyard Campbell. There were several films there that I've been wanting to see. So I cleared out my schedule and made the theater my home last weekend! The first film I saw was the amazing indie film THE PERKS OF BEING A WALLFLOWER. 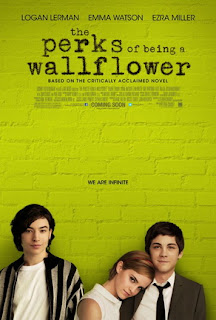 Isolation, lonliness, anxiety, and friendship are just some of the emotions and topics one can expect from the film. Some of us (including me) had a difficult time adapting to serious changes. However, nothing is more nerve racking than being a freshman in high school. Let the pain begin.

Set in Pittsberg in the late 80's, the film focuses on 15 year-old freshman Charlie (Logan Lerman from PERCY JACKSON and 3:10 TO YUMA). Charlie is your typical, shy, awkward teenager who's slow on making friends, with the exception of his English teacher Mr. Anderson (Paul Rudd in a rare non-comedic role). He's soon adopted by a couple of seniors who are on the fringe with the rest of their class: the charming and eclectic Sam (Emma Watson from HARRY POTTER series) and her charasmatic gay stepbrother Patrick (Ezra Miller from WE NEED TO TALK ABOUT KEVIN). Charlie eventually becomes enfatuated with Sam, even though she is already seeing someone, but we learn that she has a history and habit of making bad romantic choices. But that doesn't stop him from loving her, as he learns that they have more in common than they will ever realize.

The film was written and directed by Steven Chbosky, and based on his own popular 1999 novel of the same name. Right away, we know that this was a labor of love for Chbosky. Every scene was about him, or a memory, or an incident that forever changed his life. Some of my favorite scenes are when Charlie, Sam and Patrick and all of their friends take part in acting out THE ROCKY HORROR PICTURE SHOW. Now in case you forgot (and shame on you if you did), I attend regular monthly screenings of this paticular movie over at the Camer 3 in Downtown San Jose. It's so much fun to see my friends from Barely Legal acting out along with ROCKY. This hit home with me and it was so cool to see this represented in the film and see Charlie graduating from being a spectator to becoming a Rocky! Very cool to see!

But it's not all fun and games for Charlie. Because he's so quiet and trusting, all the seniors in the group begin telling him their secrets that causes him a great deal of pressure. Add that he's also dealing some very deep personal trauma and you have one kid that is ready to explode.

The film also touches on some of the more traditional subject matters that teens can relate to: sex, drugs, music, crushes, mixed tapes, and just being young and in love. It's hard to imagine that there's life after high school. I thought I'd be there forever (only because it felt like forever). Now when I look back I laugh at all the things that I thought were so important. "OMG that girl I like just found out that I like her and now what am I going to do now that she knows!" Yup, to be young and naive. Glad that part is over and done with.

THE PERKS OF BEING A WALLFLOWER is touching, poetic look at teen agnst and young love set to the David Bowie song "Heroes." It just doesn't get any better than that folks. This was an amazing cinematic experience for me because I could totally relate to it. And I bet all you people out there will too. 5 out of 5 stars!! Highly recommended!!


THE PERKS OF BEING A WALLFLOWER is currently playing at select theaters nationwide, including at the Camera Cinemas here in the Bay Area. To view showtimes, visit their website at www.cameracinemas.com.

Thanks for reading, and enjoy the show!
Posted by Philip Castor at 7:39 PM