After a long and rough November at my regular job, I finally got around to seeing movies once again! So I headed back down to the Camera 7 in the Pruneyard Campbell to see a couple of films. The first film I saw was the new film ARGO directed by Ben Affleck. 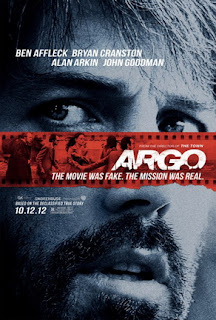 On November 4, 1979, as the Iranian revolution reaches its boiling point, militants storm the U.S. embassy in Tehran, taking 52 Americans hostage. In the chaos, six Americans manage to slip away and find refuge in the home of the Canadian ambassador. Knowing it is only a matter of time before the six are found out and likely killed, the Canadian and American governments ask the CIA to intervene. The CIA turns to their top “exfiltration” specialist, Tony Mendez (Affleck), who devises a daring plan: to create a phony Canadian film project looking to shoot in Iran and smuggle the Americans out as its production crew. With the help of some trusted Hollywood contacts, Mendez creates the ruse and proceeds to Iran as its associate producer.

Based on true events, Ben Affleck demonstrates that he is a better director than he his an actor. He tells this story uniquely with his own cinematic art and style. The events that transpire are part of history, and we know what happens. But the way Affleck creates tension in the film, especially towards the end, this viewer found himself at the edge of his seat, wondering what's going to happen. With this film, we see Affleck's true calling: a fantastic a gifted director. While his previous films GONE BABY GONE and THE TOWN only showed a glimpse of his talents, ARGO announces the arrival of a major Hollywood director.

The film's A-list cast does a fantastic job of bringing these real life characters to the big screen. The biggest treat in this film are brilliant and a lot of time funny performances from John Goodman and Alan Arkin. These guys really bring all the Hollywood aspect to the film to life while delivering Oscar worthy performances that will hopefully be recognized. Also make sure you stay in the theater to watch the credits. You'll see some real photographs and clips that mirror Affleck's film and actors.

Besides evoking the late seventies' dorky fashions of ubiquitous mustaches, long hair, and large glasses, Argo recreates the volatile environment of world affairs when relief from Vietnam did not mean relief from rogue governments like Iran's, as the condemnation of Salman Rushdie has taught well. Every Iranian bureaucrat and soldier carries a hidden threat in beards and bearing. The end of the film involving the airport check points will no doubt remind us the world we live in now post 9/11.

Containing brilliant directing, acting, story and some fun sci-fi references throughout, ARGO is one of the best films of 2012. Look for this film to be nominated for several Oscars next year! 5 out of 5 stars!! Highly recommended!!


ARGO is currently playing at select theaters nationwide, including at the Camera Cinemas here in the Bay Area. To view showtimes, visit their website at www.cameracinemas.com.

Thanks for reading, and enjoy the show!
Posted by Philip Castor at 8:46 PM