Just in case you didn't know, our 16th President Abraham Lincoln has appeared in the movies since the silent film era. Great directors such as D. W. Griffith and John Ford have told the story of this great leader. Earlier this year audiences were "treated" to a secret, alternative biography of Lincoln in the form of ABRAHAM LINCOLN: VAMPIRE HUNTER. Now acclaimed director Steven Spielberg and Academy Award winning actor Daniel Day-Lewis bring to the screen one of the greatest presidents in America's history and one of the most important events in history that changed our country for the better. The film LINCOLN is a great American movie! 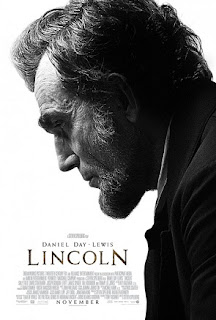 The film's synopsis is as follows: In 1865, as the American Civil War winds inexorably toward conclusion, U.S. president Abraham Lincoln endeavors to achieve passage of the landmark constitutional amendment which will forever ban slavery from the United States. However, his task is a race against time, for peace may come at any time, and if it comes before the amendment is passed, the returning southern states will stop it before it can become law. Lincoln must, by almost any means possible, obtain enough votes from a recalcitrant Congress before peace arrives and it is too late. Yet the president is torn, as an early peace would save thousands of lives. As the nation confronts its conscience over the freedom of its entire population, Lincoln faces his own crisis of conscience -- end slavery or end the war.

Spielberg jettisons the traditional biopic; meaning the whole life of out 16th president is forgone, instead the film focuses on one specific part of Lincoln's life. He also jettisons his usual style of directing for a more simplistic and personal storytelling: using just simple set ups and little pans of the camera here and there he effectively creates a  way of telling the story of Lincoln's struggle to get his Thirteenth Amendment passed by Congress to free the slaves of America. Spielberg puts the camera in front of his cast and lets them do what they do best, which captures some of the greatest acting ever captured.

Daniel Day-Lewis embodies Lincoln like no other actor has done before. Wise, compassionate, at times very humorous, and also determined to end slavery in America. When you watch the film, you don't even see Day-Lewis at all, there in only Abraham Lincoln. Let's face it, the man actually and physically looks like Lincoln. The resemblance is truly uncanny! His performance is worthy of an Oscar nomination all the way!

Also giving stellar performances is Sally Field, who bounces back from her poorly miscast role as Aunt May in the AMAZING SPIDER-MAN film. Here she portrays the first lady Mary Todd Lincoln, who is also tough and compassionate and has a little spitfire to her personality. The great Tommy Lee Jones portrayal of Thaddeus Stevens is sure to nab him a Best Supporting Actor nomination for next year's Oscars. Also appearing in the movie are James Spader, Hal Holbrook, Joseph Gordon-Levitt (making this his third film this year that he has appeared in), Jackie Earle Haley, John Hawkes, Tim Blake Nelson, Bruce McGill, Joseph Cross, Jeremy Strong, David Warshofsky and Jared Harris.

Since this is a historical drama, there are no big actions scenes. We get to see some of the Civil War, but the real fighting takes place in Congress, where we witness first hand that some things never change. We watch in horror the bickering and idiocy that the Congressmen demonstrate. This fight for equality and acceptance mirrors the topics of today, mainly the fight for gay rights and gay marriage. Sometimes I wonder if we as a nation and as a race will ever learn from the mistakes made in history.


LINCOLN is currently playing at select theaters nationwide, including at the Camera Cinemas here in the Bay Area. To view showtimes, visit their website at www.cameracinemas.com.

Thanks for reading, and enjoy the show!
Posted by Philip Castor at 7:08 PM