I have a soft spot for the romantic comedies, but there haven't been too many good ones so far this year. However, I did see one that was blurring the lines of the genre, melding it with drama to create a funny, sad tragic, and hopeful romantic comedy that was very satisfying to watch. Based on the novel of the same name by Matthew Quick, the film SILVER LININGS PLAYBOOK was a complete and utter joy to view. 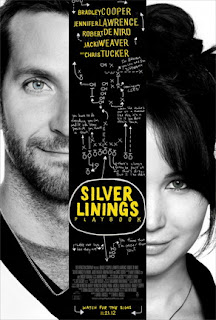 The film's official synopsis: Pat Solatano (Bradley Cooper) has lost everything -- his house, his job, and his wife. He now finds himself living back with his mother Dolores (Jacki Weaver) and father Pat Sr. (Robert De Niro) after spending eight months in a state institution on a plea bargain. Determined to rebuild his life, he meets Tiffany (Jennifer Lawrence), a mysterious girl with problems of her own, and things get complicated. She offers to help Pat reconnect with his wife, but only if he'll do something very important for her in return.

The movie was written and directed by David O. Russell, the man responsible for such films as THREE KINGS, I HEART HUCKABEES, and THE FIGHTER. Russell does a tremendous job of keeping the film even balanced between the comedy and the tear jerking drama. We laugh when we're supposed to, and we are emotional the next. Like his previous films, the directing is precise and moves along well without it dragging. It's always tricky adapting a novel to the big screen, but in Russell's hands, the film really takes the novel to the next level.

The cast itself turns in a phenomenal job. Bradley Cooper steps out of his comfort zone and tackles one of his best roles ever. To portray a bi-polar character who suffers from severe breakdowns, emotionally unstable at times is already challenging enough. But to wear his heart on his sleeve to show us that Pat is sensitive, vulnerable, and means well really says something about Copper's acting ability. Jennifer Lawrence is brilliant as Tiffany and it was refreshing to see her take on such a complex adult role. Her performance is on par with her Ree character from WINTER'S BONE, but she's more known for portraying Katniss Everdeen from THE HUNGER GAMES series. However the first time I saw her was in last year's film LIKE CRAZY. She had a small part in that film, but I knew that she was a talented actress and she shows it off here. Of course, I cannot forget Robert Di Niro as the superstitious, Philadelphia Eagles obsessed father Pat Sr. I think that this was one of his best roles and he was fantastic.

All in all SILVER LININGS PLAYBOOK is a blast of fresh air to the romantic comedy genre. Full of laughs and tears, this is a film that you should take a date to go see. 4 out of 5 stars!! Highly recommended!!


SILVER LININGS PLAYBOOK is currently playing at select theaters nationwide, including at the Camera Cinemas here in the Bay Area. To view showtimes, visit their website at www.cameracinemas.com.

Thanks for reading, and enjoy the show!
Posted by Philip Castor at 11:17 PM