Phil attends the Midnites for Maniacs "NO PAIN, NO GAIN" Triple Feature at the Castro Theatre-December 7, 2012 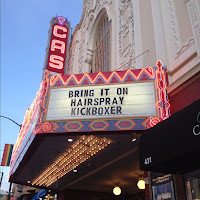 Hello again from the City by the Bay! That's right I'm back up here in San Francisco to attend the Midnites for Maniacs triple feature at the historic Castro Theatre. Hosted by Jesse Hawthorne Ficks, the theme for the show was titled "No Pain, No Gain." The theatre screened three modern day films that showcased this perfectly. Plus all three movies were the original 35mm film prints! As always, Jesse handpicked some awesome trailers to show, but he had a major surprise for us tonight, as he screened several Jean-Claude Van Dam's best movie trailers! So let's waste anymore time! Let the pain begin!!

The first film of the night was the coming of age, cheerleading teen comedy flick BRING IT ON. The film stars Kirsten Dunst as senior Torrance Shipman, who has just become the captain of her cheerleading squad. With the addition of new transfer student Missy Pantone (the sexy Eliza Dushku), the Toro cheerleading squad from Rancho Carne High School in San Diego looks to dominate nationals once again. But soon a problem arises as Torrance discovers that their routines were stolen from the East Compton Clovers by their former captain. The Clovers new captain Isis (the beautiful Gabrielle Union) looks to expose them for the frauds that they are. Soon there's a mad scramble as they must come up with an entirely new and original routine. Things get even more problematic for Torrance as she falls in love with Missy's older brother Cliff (Jesse Bradford) even though she already has a boyfriend named Aaron (Richard Hillman).

I remember seeing this movie in the theaters when it first came out and I thought it was hilarious as well as cutting edge. The film was queer positive, racially progressive, filled with teen angst, and provided a positive message that you cannot fail if you believe in yourself. Now believe it or not, the film spawned five sequels (they were all straight to video releases) and it also became a celebrated Broadway musical in 2011. The film was originally released by Universal Pictures on August 25, 2000. The 35mm film print that was screened came from the fine folks at Universal. Three trailers for the next M4M show was screened before the film: 1992's WAYNE'S WORLD, 2001's FREDDY GOT FINGERED, and 2008's STEP BROTHERS.

Film number two was the classic John Waters' film HAIRSPRAY. The film marked the acting debut of Ricki Lake as Tracy Turnblad, a 'pleasantly plump' teenager who achieves her dream of becoming a regular on the Corny Collins Dance Show. Now a teen hero, she starts using her fame to speak out for the causes she believes in, most of all integration. In doing so, she earns the wrath of the show's former star, Amber Von Tussle (Colleen Fitzpatrick), as well as Amber's manipulative, pro-segregation parents (Sonny Bono and Debbie Harry). The rivalry comes to a head as Amber and Tracy vie for the title of Miss Auto Show 1963. Aiding Tracy in her cause are her best friend Penny Pingleton (Leslie Ann Powers), her boyfriend Link Larkin (Michael St. Gerard), and her parents (Ben Stiller and the legendary Divine, who passed away shortly after completion of the film).

Like the previous film, I saw this when it first came out and it too was cutting edge. It had a short, chubby teen with big hair who gets the guy at the end, addressed racism and equality, and it was the first John Waters film to receive a PG-13 rating, which at that time was unheard of. The film was released by New Line Cinema on February 26, 1988, earning a modest gross of $8 million. However, it managed to attract a larger audience on home video in the early 1990s and became a cult classic. Then in 2002, the film was adapted into a Broadway musical of the same name, which won eight Tony Awards, including Best Musical in 2003. A second film version of HAIRSPRAY, an adaptation of the stage musical, was also released by New Line Cinema in 2007. John Waters makes a cameo appearance in that film as, what else, a flasher. Several later John Waters trailers were screened before the movie: 2004's A DIRTY SHAME, 1998's PECKER, and 1990's CRY-BABY.

The last film of the night was KICKBOXER, starring the great martial arts actor Jean-Claude Van Damme. In the film Van Damme is Kurt Sloane, brother of Eric (Dennis Alexio), the top kickboxer in the United States. Tiring of the generic competition of his native soil, he travels with his brother to Bangkok, where he hopes to dethrone the current champ Tong Po (Michel Qissi), who has a reputation for fighting dirty.  Eric takes quite a beating in the ring but a series of illegal blows cripples him for life. Vowing revenge, Kurt trains for the fight of his life with the help of Xian (Dennis Chan), a kickboxing trainer who lives in a remote area of Thailand.

Probably the most famous of Van Damme's early work, it has some awesome kick ass fight scenes, plus some interesting moments showing the difficulty of training and trying to achieve your best while not losing your focus. Even though it suffers from some cheesy acting, dialogue, music, and a highly disturbing dance scene that must be seen to believe, it still holds up after all these years. The film was originally released to theaters on September 8, 1989. Before the film, Jesse screened seventeen, count 'em, SEVENTEEN Jean-Claude Van Damme trailers, ranging from 2012's THE EXPENDABLES 2, 2008's JCVD, 1994's STREET FIGHTER, and 1992's UNIVERSAL SOLIDER. Yes folks it was indeed a sight to see!!

And another Midnites for Maniacs show has come and gone! The next show will be on January 11, 2013 so mark this date on your calender and come on out to the City by the Bay and join in on this movie magic and fun! To learn more about Midnites for Maniacs, visit their website at www.midnitesformaniacs.com. To view upcoming shows at the Castro Theatre, visit their website at www.castrotheatre.com.

Thanks for reading, and enjoy the show!
Posted by Philip Castor at 9:08 PM