Phil attends the midnight screening of THE ROCKY HORROR PICTURE SHOW at the Albany Twin Theater-December 8, 2012 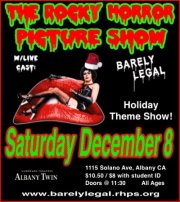 So I have been attending Barely Legal's midnight screenings of THE ROCK HORROR PICTURE SHOW for well over a year now. However, I've only attended the screening at the Camera 3 here in Downtown San Jose. They've also been having shows at the Albany Twin Theater in Albany for a while now as well. So while having breakfast with Barely Legal co-founder Bridgid McHavoc at our Post-ROCKY  hangout (the IHOP on First Street in San Jose) last week, she informed be that I had to go to the show in Albany on December 8th for several reasons. The first being was that this was the last show at the Albany Twin for 2012. Second; it was a holiday themed show. And third, Bridgid was playing none other than the infamous Dr. Frank-N-Furter. So I told my good friend Leslie about the show and she invited her whole family to join in! Plus as an added bonus; her oldest daughter Oceanna's birthday was this month. What better way to spend her Bday, right? So we all traveled up to Albany to check out the show!

The Albany Twin Theater was built in the 1970's and it's a really big theater. It had a good size screen and an impressive, real life stage! I mean it was a legit stage, used for performances and shows! It was really cool to see! Now being that we were in the East Bay, there were some differences between this show and the one put on in San Jose. The most obvious was that the crowd was much more louder, livelier, and way more vocal. Plus their commentary and the jokes are just slightly different than San Jose's but it was interesting to hear them.

The night started off with a sexy, Burlesque type number with the luscious ladies of Barely Legal seducing Santa Claus to Eartha Kitt's rendition of "Santa Baby." Yup, I knew that this was going to be fun-filled, holiday show!!

Afterwards our emcee Nate McHavoc (aka Riff Raff) whipping the audience into a frenzy! After his introductions he then handed the mic over to Bernie Bregman, a former member of the shadowcast called Sins of the Flesh. He was in charge of humiliating out group of "virgins" which was HUGE!! There must have been over 50 virgins up on the stage! So after he eliminated everyone that was under 18 years-old, he then picked out five girls and boys to participate in what he called, "Bernie's Embarrassing Pre-Show Game." Basically he had all the girls spread their legs like a porno star and he had the guys present their junk through their boxers. This was a riot! Now back in my day, the shadowcast use to embarrass the hell out of the virgins and had them do really fucked up shit, which was done in the good name of fun!! So this was a fun flashback for me.

After the games were over, Nate got back up stage to introduce the cast for the show. Again, being in the East Bay, there were a lot more crew members, on both the technical side as well as actors and actresses. So most of the cast were people I have never seen before, and with Bridgid as Frank, it was a totally new show and I loved it! The "new" cast members were awesome, the audience was so into it, and Bridgid was fantastic as Dr. Frank-N-Furter!

As with the Fourth of July, everyone was sporting holiday costumes, which included Santa hats, bells, red and green outfits, X-mas lights, and a certain someone dressed up in a snowman costume! Yes Virgina, there really is a talking snowman!! Also, since it was Oceanna's Bday, she was picked to play Betty Munroe Hapschatt!! Our little girl has grown up into a beautiful bride!! 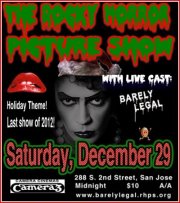 What an amazing night! This was by far one of my favorite Barely Legal shows ever! And I've seen a year's worth already! So in case you missed out on all this midnight fun, fret not my friends! There is still one more show left and it will be their last show for 2012. The next show will be on Saturday 29th at the Camera 3 in Downtown San Jose. It will also be a holiday themed show so I know you all want to come check it out now after reading this article! And as a reminder, Barely Legal are looking for new members so if you've ever wanted to be a star, now's your chance! To learn more about Barely Legal, their schedule, and how to become a member, visit their website at barelylegal.rhps.org. Also look for them on Facebook as well! Also visit the Camera Cinemas website at www.cameracinemas.com. So what are you waiting for? Come out on the 29th and join in on all this ROCKY HORROR fun! You'll be glad you did!

Thanks for reading, and enjoy the show!
Posted by Philip Castor at 9:17 PM