Now when I was younger, I was a big fan of the James Bond films starring Roger Moore and Sean Connery. Then I got more into watching horror films and so Mr. 007 fell by the wayside. Several years later a dashing and intense actor by the named Daniel Craig became the new James Bond and my curiosity peaked again. After CASINO ROYALE and QUANTUM OF SOLACE, we come to the next chapter of the James Bond franchise: the very personal and transcending SKYFALL. 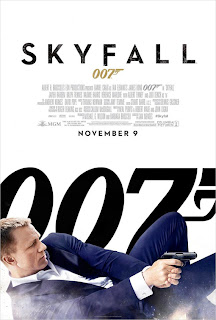 In this chapter, Bond becomes more fleshed out, more three-dimensional, more human.  After being accidentally shot in the line of duty and pronounced dead, he enjoys his "retirement" for several months before returning to London to investigate that attack on his former employer M16 (British Intelligence) by former operative Raoul Silva (Javier Bardem). He has a personal vendetta with M16 head M (Judi Dench), which puts Bond's loyalty to her to the test as he must protect her from her past.

Here we learn what makes Bond tick: his origin, where we was raised, and how human he is. For years we, the movie-going audience, have been shown Agent 007 as a larger than life, action adventure, super spy. With SKYFALL, we are finally treated to the revelation of Bond as a man; a man who is broken, older, but still a force to be reckoned with. Craig once again proves that he has the acting chops to play Bond, as well as the physical prowess. Plus he gets to bring more depth to the character with this installment; he comes to grip with his mortality, and learns that sometimes you have to come home to remember your roots. Kane had his Rosebud, Bond has Skyfall.

What pushes the film is the awesome casting of Javier Bardem as out main villain: flamboyant, vindictive, with a pinch of psychotic for good measure. His portrayal of Silva is fanatic and he is one of the best Bond villains in the franchise's history! Of course Judi Dench once again brings class to her role as M. Another stellar performance by Dench!

The film was directed by Sam Mendes, who has made some eclectic films like AMERICAN BEAUTY, JARHEAD, and AWAY WE GO (a personal favorite of mine). Mendes proves that he can both direct small, intimate films and hi-octave roller coaster blockbusters. He keeps the film moving forward and a great pace and shows off his ability to showcase big-time action sequences.

Overall SKYFALL is a worth entry to the Bond series and is the perfect winter blockbuster! At 50 years old, it looks like there's no slowing down for our favorite spy. 4 1/2 out of 5 stars! Highly Recommended!!


SKYFALL is currently playing at select theaters nationwide, including at the Camera Cinemas here in the Bay Area. To view showtimes, visit their website at www.cameracinemas.com.

Thanks for reading, and enjoy the show!
Posted by Philip Castor at 8:28 PM