When one sees a Quentin Tarantino movie, always expect the unexpected and always now you're gonna be entertained as Hell! His films are never boring, full of movie references, always melding several different types of genres, and are always causing some sort of controversy. He continues this tradition with his newest film: the highly entertaining, over the top violent, spaghetti western entitled DJANGO UNCHAINED. 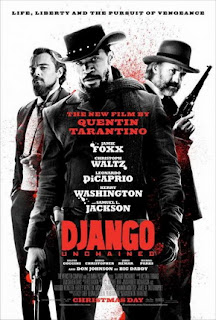 The film's official synopsis: In the pre-Civil War South, Django (Jamie Foxx) is a slave whose brutal history with his former owners lands him face-to-face with German-born bounty hunter, Dr. King Schultz (Christoph Waltz). Schultz is on the trail of the murderous Brittle brothers, and promises to free Django and re-unite him with his wife Broomhilda (Kerry Washington) in return for his assistance in tracking down his bounty. They soon learn that Django's wife is under the hands of Calvin Candie (Leonardo DiCaprio), who just happens to be a ruthless plantation owner.

The only real fault in the film is when Quentin Tarantino appears in the film as one of The LeQuint Dickey Mining Co. Employees and he spoke with a horrible accent. I think he was trying to do an Australian accent but it came out really, really bad. So I'm taking off half a star because of this. Also look for Samuel L Jackson in the film and look out for the controversial N-word. But what'd you expect from a Tarantino film?!?

DJANGO UNCHAINED is a one of Tarantino's best films, and it's already been nominated for 5 Golden Globes!! So stop reading this, get your ass to you local theater and see this movie!! 4 1/2 out of 5 stars!! Highly badass and recommended!!


DJANGO UNCHAINED is currently playing at select theaters nationwide, including at the Camera Cinemas here in the Bay Area. To view showtimes, visit their website at www.cameracinemas.com.

Thanks for reading, and enjoy the show
Posted by Philip Castor at 11:57 PM