Phil attends the one-night-only screening of THE NEW BEHIND THE GREEN DOOR with stars Broklyn Lee, Dana DeArmond, and Steven St. Croix live in-person at the Mitchell Brothers O'Farrell Theatre-October 19, 2013 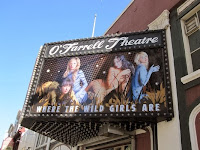 On December 17, 1972, the adult film BEHIND THE GREEN DOOR was released to theaters nationwide and was herald as an instant classic. It was the first feature film by the Mitchell Brothers (Jim and his younger brother Artie) to be screened in theaters other than their own, the infamous O'Farrell Theatre in San Francisco. The film transformed its star Marylin Chambers into an icon and household name. Now, 41 years after its release, director Paul Thomas and Vivid Entertainment has just released their latest remake/sequel film entitled THE NEW BEHIND THE GREEN DOOR, starring Brooklyn Lee, Dana DeArmond, and Steven St. Croix. To promote this new film, the O'Farrell Theatre held an open screening to the public and had all three stars there in-person to sign autographs. Yours truly was there to witness this historic event!

Upon purchasing my ticket for tonight's event, I met the theatre's marketing honcho John Michels. We immediately went into the next room where I saw some amazing artifacts from the past. There were framed original posters of BEHIND THE GREEN DOOR and RESURRECTION OF EVE. There were pictures of the late Marilyn Chambers (she passed away on April 12, 2009), along with a picture of her on the Ivory Soap box. There was also a pictorial shrine to Artie Mitchell (who was shot by Jim on February 27, 1991). There John and I were discussing the films of the Mitchell Brothers and he was quite impressed with my film knowledge. Then, out of the blue, he gave me a quick behind the scenes tour of the theatre. We passed through the majestic wooden door and climbed up a flight of stairs and I witness all the of history the theatre stored. There were drawings on the wall by the legendary underground artist Robert Crumb, pictures of the visionary Hunter S. Thompson, dozens of pictures of Marilyn Chamber performing onstage back from the 1970s. I also got to see some of the lovely ladies that were performing tonight. It was really extraordinary to witness all this history that the average attendee doesn't get to see!

After the tour, I went back downstairs, enjoyed some awesome dancing onstage, and had an incredible lap dance by the breathtaking Gemma Hart! (My favorite dancer there!) Around 10pm, I made my way to the Cine Stage Theater to see the film.

The event was hosted by the man himself Johnnie Keyes, who co-starred with Chambers in the original 1972 classic. He entertained the audience with some fantastic stories from back in the day when it was illegal to make pornographic films, how he was sent to jail by the police, his friendship with Jim and Artie who also put a million dollars to keep him out of prison. He brought out the film's stars Lee, DeArmond and Croix, and each one gave a "quick thank you" speech. Keyes then introduced the O’Farrell’s strippers, who performed an all-new production made especially for the film. After the performance, Keyes came back out, thanked the ladies, and then introduced the film. 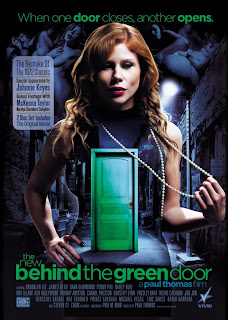 The film is a reminder of when adult films were more like films. The production value is top notch, the cinematography is excellent, the script is great, and the acting is amazing, and the sex is volcanic! This is how adult films should be made.

This is the fourth of the "classic" films that Paul Thomas has remade. He started off in 2005 with his THE NEW DEVIL IN MISS JONES, then followed that up with 2007's DEBBIE DOES DALLAS AGAIN. In 2009 he made THROAT: A CAUTIONARY TALE which was a remake of the 1972 landmark film DEEP THROAT.

Paul Thomas (or P.T. as he's called in the industry) has once again done an incredible job of paying homage to the original while simultaneously making it fresh and new. His directing is very smooth and fluent, spotlighting the raw human emotions of love, belonging, and sex. My favorite scenes are when we see Hope out and about in San Francisco. Here, Thomas demonstrates his ability to capture the beauty of the city and of his stars, who look and sound authentic and real. This is his strongest effort yet, and in my humble opinion, his best work since the remake of JONES. Plus it also helps to have an amazing script to work off of, and thanks to screenwriter Phil Noir, Thomas is able to accomplish another masterpiece of eroticism.

This is easily Brooklyn Lee's best performance. She has a very natural approach to acting, and she really nails it here in the film. Here character Hope is a flawed person; lost, spoiled, confused, and lonely. She's on a mission to discover who she is by finding who her mother is. This is classic text book psychology, and we witness it before our very eyes. In between Hope getting on with some studs, we see her shine on the beach in San Francisco with an old flame, degrade herself for money, and then the revelation of who her mother was, and who she now has become. Lee's acting is superb and really deserves to be acknowledge!

Also, her sex scenes are indescribably intense! Her threeway sex scene is so hot and smoldering, it fogged up my glasses. Her scene rivals Marilyn's from the original (in fact we see the original film playing during this paticular scene)!! Hope learns who she is through the discovery of her sexuality as well. We the fans get to have the best of both worlds: an performer who can act and have hot sex. Hopefully in January, when the AVN Awards Show comes, she will win Best Actress for this role!

The film also marks Lee's last appearance in an adult film. In May 1, 2013, at the height of her popularity, she announced her retirement from the adult industry, citing to "focus on her education and because she was in a relationship and no longer wished to have sex with anyone besides her boyfriend" according to the AVN news website. If this is the case, Brooklyn Lee should be very pleased that she is going out on a very high note! A truly riveting performance!!

Also turning in some great performances is Steven St. Croix, who's acting is once again awesome! He's acting abilities are legendary and so is his "tool." Croix is a legend in the adult film world, a world he's been in since 1992! Also the lovely Dana DeArmond charms her way into Croix's pants and their sex scene is hot and nasty! (And yes, my glasses fogged up during that scene as well) To make a long story short, DeArmond is fucking amazing in the film! James Deen is the guy you love to hate. He's a deadbeat, he's a cheater, and he has sex with not only Lee, but with Ash Hollywood and Penny Pax, and then becomes Kylie Ireland's (in a non-sex role) new boy toy. So yeah, I hate the lucky bastard!

Now, I do have one, small, little complaint about the film. It's called THE NEW BEHIND THE GREEN DOOR, however, there is no green door! Really! I have watched my DVD about 10 times now, and I keep looking and looking for that mysterious green door! But there isn't one!! Did somebody forget to make a green door? I mean, there was one in the original, so why not here? I need answers!! OK, I'm done with my venting. Let's continue with my review.

After the screening, John Michaels gave me a DVD copy of the film and I made my way over to meet the stars. I gave Johnnie Keyes a big handshake and I thanked him for all the sacrifices he made for us to be able to watch these films. I meet Croix and told him how great he was in the movie. Dana was so much fun to talk to and she was full of energy and just a really cool person to chat with. With Brooklyn, I mentioned to her just how much I enjoyed the film, how amazing she was in it, and I wished her the best with her boyfriend and her education. She was such a sweetheart: kind, funny, and beautiful. She and Dana were playing off of one another and this was a fun for me to witness this. I had them all autograph my DVD, said my thank yous and goodbyes one last time, and then made my way back home. It was one of the best nights of my life.

THE NEW BEHIND THE GREEN DOOR is available online at the Vivid Entertainment website as well as at Adult DVD Empire. To learn more about the Mitchell Brothers O"Farrell Theatre, their business hours, and upcoming special events, visit their website at www.ofarrell.com.

Thanks for reading, and enjoy the show!
Posted by Philip Castor at 7:48 PM