Last year I had the privileged of seeing the world premiere of SOMEWHERE SLOW, an amazing indie drama at the 2013 Cinequest Film Festival. Now the film had returned back home to San Jose, as the film was booked for one week only at the Camera 3. To make this event even more special, writer/director Jeremy O'Keefe and actor Graham Patrick Martin would be in attendance for the 5pm screening on Saturday, and yours truly was there to witness this event! 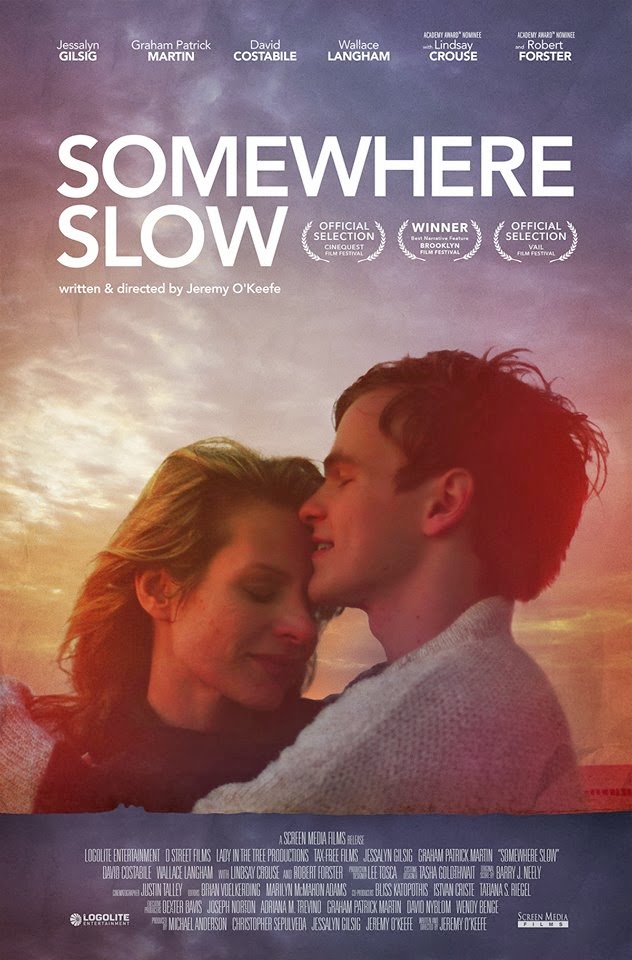 In case you missed it, here is my original review of the film when I saw it during Cinequest 23:

Written and directed by Jeremy O'Keefe, the movie's about Anna Thompson (Jessalyn Gilsig), a Forty-something, bulimic, chain smoking woman who suffers from very low self-esteem. When she gets mixed-up in a convenience store robbery, she makes a decision to walk out of her life, not knowing where she's going. Along the way she meets teen runaway named Travis (Graham Patrick Martin), who's also on his own journey of self-discovery. The two form an unlikely bond which develops into something much more, but eventually Anna realizes that she can't runaway from her old life.

All I can say is wow! What a powerful and amazing film that tackles the topic of a female mid-life crisis, which we don't see too often. But a closer examination of the film tells us that we cannot run away from our problems. However, sometimes you need to step out of your life and see what's wrong with it and how you can fix it. Anna steps out of her normal routine and begins a journey to which she doesn't set out intentionally, but along the way, she learns about herself and discovers that you need to go back home to remind yourself of who you are. After the screening, most of the cast and crew (including Jeremy, Jessalyn, and Graham) participated in an informative Q&A. Highly recommended!

It has been a year since I've seen the film and it was incredible to see it on the big screen once again! It still hasn't lost any of its power to make the audience laugh, cry, and enchant! After the screening, O'Keefe and Martin participated in a Q&A with the audience. O'Keefe informed the audience that the film has gone one to win rave reviews from other film festivals, including the 2013 Brooklyn Film Festival where it won Best Narrative Feature. It has garnered positive reviews from publications such as the LA Times, The Village Voice, The NY Times, and the Philadelphia Inquirer. But the big news that O'Keefe shared was that the film is now available to watch as a VOD via Amazon!!

SOMEWHERE SLOW was one of my favorite films from Cinequest 2013!! This is what I love about independent films! They don't follow the trends or tired out conventions that Hollywood relies on! Here is s film that makes you think while falling in love with it! 5 out of 5 stars!! Highly recommended!!


SOMEWHERE SLOW is currently playing in select theaters nationwide. To see if it's playing in a theater near you, make sure you check out the film's official Facebook page. The film is now available to download to rent or to buy on the Amazon website.

Thanks for reading, and enjoy the show!
Posted by Philip Castor at 11:30 AM