I recently had the pleasure of finally going out and seeing some movies in the theaters, which has been long overdue! Yes, I've been spending a lot of time down in Hollywood, but as the old saying goes, "There's no place like home." So I headed back to the Camera 7 in the Pruneyard Campbell to see the indie film drama NEBRASKA. 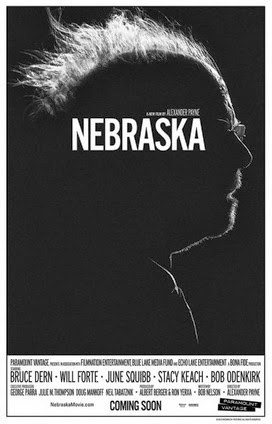 The film stars acting legend Bruce Dern as Woody Grant; an old, cantankerous alcoholic father who thinks he's a millionaire after receiving a sweepstakes letter in the mail. Instead of mailing the letter back and risk losing his fortune, he swindles his youngest son David (Will Forte) in driving him from Billings, Montana to Lincoln, Nebraska. Along the way they stop in Woody's hometown for a family reunion, where both father and son learn a little more about each other.

Directed by Alexander Payne (ELECTION, ABOUT SCHMIDT, SIDEWAYS, THE DESCENDANTS) and written by newcomer Bob Nelson, the film takes the traditional road trip scenario and turns it completely on its own head. While most road trip films are comedic, predictable, and somewhat juvenile, this takes it to a whole different level; it's sincere, honest, funny, and showcases a father/son bonding that is touching and real.

Bruce Dern gives what has been called his best performance ever on film! His Woody reminded me a lot of my grandfather when he was still alive, and it hit really close to home for me. He brings a lot of stubbornness (which brings in the comedy factor) and as the film unfolds, we get to know more about Woody, his life, his choices, and his mistakes. His vulnerability anchors the film and brings it

It's about time that Dern finally get his recognition he deserves. Here is an actor who has appeared in movies sine the 1960s. Acting in a couple of Roger Corman cult classics like THE WILD ANGELS and THE TRIP, we went on to act in films such as SILENT RUNNING, THE KING OF MARVIN GARDENS, THE 'BURBS, MONSTER, and DJANGO UNCHAINED. Dern has payed his dues for years, and it's so gratifying to see him finally get his spotlight.

Another amazing aspect of the film comes from Will Forte, who is more famous for his comedy sketches from his time on Saturday Night Live. His role as David shows that Forte can also to more than just comedic roles. He has the acting chops to be in dramatic roles and I hope to see him stretch more as an actor.

The movie was shot in black and white, mush to the dismay from distributor Paramount Vantage's wishes. It gives the film a beautiful and poetic look; creating a bleak landscape that captures the bleak of nothingness of Middle America. At times it's almost hard to watch because there is nothing. Nothing to do but getting drunk at the local bar. Local businesses are closed, farms are dried out, the townsfolk walk around town almost aimlessly. Truly a bleak existence that is captured in glorious black and white.


NEBRASKA is currently playing in theaters nationwide, including the Camera Cinemas here in the Bay Area. To view showtimes, visit their website at www.cameracinemas.com.

Thanks for reading, and enjoy the show!
Posted by Philip Castor at 5:25 PM