Phil hosts the Camera Cinema's Cult Movie Screening of THE BIG LEBOWSKI at the Camera 3 in Downtown San Jose-Feb. 13, 2014

Hello again everybody and welcome to the 2014 Cult Movie series at the Camera 3 in Downtown San Jose! Now for those of you who are late to the game, let me explain this cool series. In 2011 the Camera Cinemas started up the Cult Movie series (which for years had been called the Midnight Movie series). They would show one cult film twice a month (Thursday nights at 9:30 and Saturday nights at midnight) from February through November. This past Thursday night was Opening Night and once again yours truly was back as the host! The series was kicked off into high gear with the screening of the 1998 Coen Brother's film THE BIG LEBOWSKI! Prizes were donated by Streetlight Records and by Time Tunnel Toys, both located here in San Jose. There were also yummy donuts to eat, courtesy of Psycho Donuts located in the lobby. 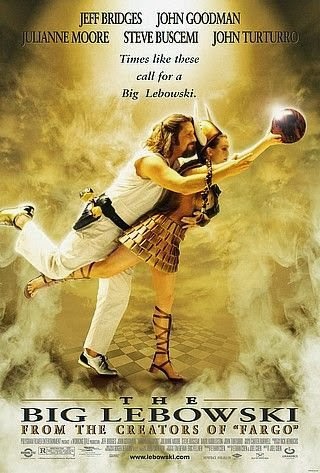 When the film was released to theaters by Universal Pictures on March 6, 1998, it made a loud thud at the boxoffice. The film's budget was $15 million but it only grossed only a little over $5 million.  However, it achieved its cult status when it was released on DVD. Then a couple of years later is was booked for the midnight slot at the New Beverly in Los Angeles. Then it played over in Santa Cruz at midnight screenings for the six months. Now it's hailed as a true cult classic and a beloved Coen Brothers film!

Tonight we had over 40 people in attendance!What a great way to kick off the 2014 season! Now like I said, the Camera 3 will be showing one cult classic film twice a month from now till November. Next month we'll be screening the 1995 cult classic SHOWGIRLS on Thursday, March 13th at 9:30pm and again on Saturday, March 15th at midnight! So make plans to attend this screening folks! It's gonna be wild, crazy and sexy!! To view the full 2014 Cult Movie schedule, visit the Camera Cinemas website at www.cameracinemas.com.

Thanks for reading, and enjoy the show!
Posted by Philip Castor at 7:56 PM