Phil sees HER at the Camera 7 Pruneyard Campbell-February 2, 2014

Independent films take a lot more chances than their Hollywood counterparts. It is these chances that can make or break a film, but I applaud the filmmakers for taking that chance anyway. Originality is something that we are sorely missing in modern day cinemas. Thankfully, we have auteur Spike Jonez, who has cleverly combines several genres to create the science fiction, romantic comedy drama entitled HER, an interesting examination of what happens when loneliness and technology meet. 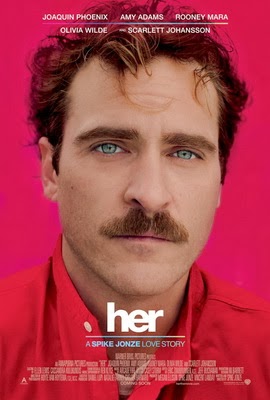 The film's official synopsis: Theodore (Joaquin Phoenix) composes heartfelt missives for lovers, family members and others with whom his clients have a soulful connection, but his own emotions have remained a mystery to him since breaking up with his wife Catherine (Rooney Mara). Then he develops an unlikely new virtual relationship with Samantha (voiced by Scarlett Johansson), an artificially-intelligent computer operating system that has a curiosity about the world and the joy over quotidian details that have been missing for so long in his life.

Here is a very interesting take on what the meaning of love and relationships in the 21st century where technology rules our lives. Have we become so disenchanted with other people that we would rather communicate with one another via email? Have we as a society have forgotten how to communicate and so we rely on technologies or apps such as Facebook, Twitter, Instagram, or Tumblr? To show love or some kind of emotions are we now forced to call 1-800- FLOWERS and send roses to express ourselves? To try to make plans with family or friends as become cumbersome, so we now just use Skype to converse.

Here we have Theodore having  difficulty with being among people, especially after his bitter divorce from his wife. Joaquin Phoenix demonstrates that pain, as well as anxiety and how uncomfortable it is for him to be among people. Suddenly, even the near future, we will still suffer from being withdrawn and apathetic. But what is it with the human race being unable to express ourselves with words? Are we that scared of what other people will say or think? Nowadays people use dating websites to meet and maybe find their "special someone." In the film, Theodore finds love in the last place he was expecting.

We do not see Scarlett Johansson at all in the film. We only hear her voice: her soft, sexy, sweet, curious, happy, loving voice. It really surprised me that she has so much acting range in just her voice. Here the audience become sympathetic with  Samantha, even though she's just a computer program. Be we witness her grow more and more, and with each passing day, we see something magical happen: we witness the miracle of falling in love.

Now I want to put my stamp on this subject, which has been in huge debate since the release of the film. I want to say, on record, that Theodore and Samantha's relationship was indeed very real! Yes I know what you're thinking: What the hell are you talking about? He's real! She's a computer program! They relationship can't be real because she isn't real!!

Now who are we to judge what is real or not? Or better yet, if their love was real? Their love is real because it was real to them! Period! He is a frail, lonely man who cannot connect with people. She is a program who is capable of growing into something more than just original design. Together, these two misfits discover something about themselves that transcends into something the is very real to them. Because they feel it, and they are able to express it, that makes their love and relationship real!

HER is one of the most original love stories ever told in the world of cinema!! This is a different kind of date film you will ever see! Take my advise and go see this enchanting love story on the big screen as it was meant to be seen! 5 out of 5 stars!! Highly recommended!!


HER is currently playing in theaters nationwide, including the Camera Cinemas here in the Bay Area. To view showtimes, visit their website at www.cameracinemas.com.

Thanks for reading, and enjoy the show!
Posted by Philip Castor at 11:01 AM