Independent films have reshaped the cinematic landscape for last several decades. In the horror genre, these films brought new ideas, new stories, new scares and new voices that have impacted society and pop culture as we know it. From NIGHT OF THE LIVING DEAD and THE TEXAS CHAINSAW MASSACRE to THE BLAIR WITCH PROJECT and TRICK 'R TREAT, the world of horror has seen some groundbreaking films that are both politically and socially charged as well as being just horrifyingly disturbing. Today's film has received so much acclaim that it's downright scary. And after seeing THE AUTOPSY OF JANE DOE for myself, those praises are very much deserved. 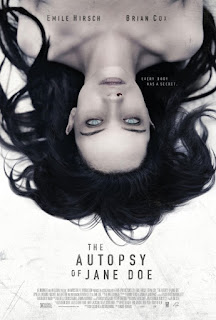 The films' official synopsis: It’s just another night at the morgue for a father (Brian Cox) and son (Emile Hirsch) team of coroners, until an unidentified, highly unusual corpse comes in. Discovered buried in the basement of the home of a brutally murdered family, the young Jane Doe—eerily well preserved and with no visible signs of trauma—is shrouded in mystery. As they work into the night to piece together the cause of her death, the two men begin to uncover the disturbing secrets of her life. Soon, a series of terrifying events make it clear: this Jane Doe may not be dead. The latest from TROLLHUNTER director André Øvredal is a scarily unpredictable, supernatural shocker that never lets up.

There are many reasons as to why I absolutely loved this gem of a horror film. One of them is that André Øvredal is just so damn talented. His directing is so precise and controlled, his compositions are flawless and you knows exactly to make us feel terrified. His visuals grabs our attention and doesn't let go until the movie ends. He's grown as a director; from TROLLHUNTER (which is freaking awesome if you haven't seen it yet) to this movie is astounding! And this is only his third feature film! I can't image what he's going to be like as a director in ten years! One can only hope for more original and horrifyingly cinematic tales of terror!

You can't have a good horror movie without a truly terrifying script and that's where screenwriters Ian Goldberg and Richard Naing come into the picture. These two individuals wrote one of the best original scripts ever! The story is simple but it's so dense and layered that it takes its time to unravel the mystery and horror. Taking something that's disturbing already such as working in the morgue and cranking up the fear up to eleven is no small feat to accomplish. But Goldberg and Naing pulled it off effortlessly, and as a result, scared the living hell out of me!

The film's cast turned in some outstanding performances. Brian Cox is a legend, having been in films such as BRAVEHEART, RUSHMORE, HIDDEN AGENDA and THE RING. Cox's casting as Tom is perfect as he brings his ability to add depth and personality to his character. Emile Hirsch's portrayal as Austin is also well done, as is his love interest Emma, played by the lovely Ophelia Lovibond. But for me, the best performance of the movie comes from our Jane Doe herself Olwen Catherine Kelly. It's not easy playing a dead person, but to do it throughout the film and be naked as well, plus having appliances, guts and organs all over you, well, that's some damn fine acting!

THE AUTOPSY OF JANE DOE is one of the best horror films of 2017!! Once again, the indie film world has unleashed of the scariest films I have seen in a long time!! So forget those bloated and shitty Hollywood horror movies and check this bad ass flick!! 5 out of 5 stars!! Highly recommended!!


THE AUTOPSY OF JANE DOE is currently playing in select theaters in cities nationwide. Check your local listings to see if it's playing at a theater near you. It's also available on Netflix, iTunes, video on demand and other streaming services. The film will be available on Blu-Ray and DVD on June 27, 2017 from IFC Midnight.

Thanks for reading, and enjoy the show!
Posted by Philip Castor at 8:11 AM