In the late 1990's, there was an influx of Japanese Horror films that caught American audiences off guard. These films, called J-Horror for short, revolutionized the genre and soon caught Hollywood's attention as well. Shortly thereafter, we began to see many of the J-Horror film remade by major studios in an attempt to capture that same audience, as well as get some of that sweet boxoffice dollars. Based of the RINGU films, 2002's THE RING became a sensation and has grossed over $230.1 billion dollars worldwide. It spawned a sequel in 2005 and THE RING TWO became another smash hit. earning over $160.4 million worldwide. However, the sequel didn't fair well with critics and fans who thought it didn't live up to the first film. Then came silence for the next twelve years until Paramount Pictures decided to resurrect the franchise once again. This past weekend I saw RINGS for myself to see if it lived up to the originals. 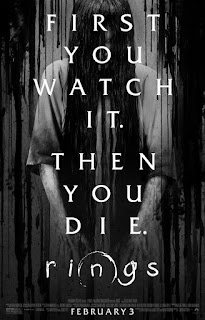 The film's official synopsis: A young woman becomes worried about her boyfriend when he explores a dark subculture surrounding a mysterious videotape said to kill the watcher seven days after he has viewed it. She sacrifices herself to save her boyfriend and in doing so makes a horrifying discovery: there is a “movie within the movie” that no one has ever seen before…

While I found it somewhat entertaining, I thought the story was predictable and boring, the characters were underdeveloped and lacked any real depth, it wasn't really scary and we hardly got to see Samara. Not off to a good start there movie.

First off, credit to Matilda Lutz, Alex Roe, Vincent D'Onofrio, Johnny Galecki, Aimee Teegarden and Bonnie Morgan for trying their best of making a good and scary movie. Really, thank you all for trying and I know you ladies and gentlemen really did try. But as the old saying goes, "You can put a pig in a dress but it's still a pig." But I don't blame you all. You're all talented actors and actresses and I hope to see you all again in other film projects, but I do not hold you accountable for this failed attempt of a relaunch of a major franchise.

First, I blame filmmaker F. Javier Gutiérrez for directing this lazy attempt of a movie. Hard to believe that this is the same guy who made the 2008 film BEFORE THE FALL, which was an absolutely stunning work of art! That was one of my favorite films of that year and I've been anxiously awaiting what his next film would be. And here it is, and it made me wanna bang my head against the wall. You totally let me down Gutiérrez. You shattered my world and now I wanna cry cause you made this shitty movie.

Next on hit list, let's talk about the screenwriters for bit. The film was written by David Loucka, Jacob Estes and Akiva Goldsman and I just want to say that I hate you all from the bottom of my heart. Really, that was the best story idea you guys came up with? There's this "movie within the movie and, like, crazy scary stuff happens and then, like there's this new backstory about Samara and then there's Vincent D'Onofrio doing his thing, and then we end the film by using the standard, tired, cliched ending that Hollywood uses all the time." Seriously, you guys suck hard balls. Why didn't use some of the story aspects for the original RINGU films? Then flesh the themes out and combine it with traditional American aspects that audiences can relate to and skip the "standard, tired, cliched ending that Hollywood uses" and end the film with closure and then leave it alone. Is that too much to ask for these days?

RINGS is an unnecessary, unwanted horror film to a franchise that should have stayed dead! The film is twelve years too late and there isn't an audience there anymore. We've all moved on from this. It had its time but that was a long time ago. It's time for Hollywood to make original horror movies again! So stop wasting our time with these shitty remakes, relaunches and reboots and go make original movie again! 3 out of 5 stars! Wait till it comes out on Redbox!!


RINGS is currently playing in theaters nationwide. Check your local listings to see if it's playing at a theater near you.

Thanks for reading, and enjoy the show!
Posted by Philip Castor at 4:00 PM