Welcome back my loyal readers to Phil's Film Adventures! After taking a very long and much needed break, I'm back and better than ever!! And what better way to kick off my glorious return to the blogging world than to review the final chapter of a franchise that's been around since 2002. After 15 years and six films, it is with a heavy heart that we must say goodbye to our dear friend Alice with this, the last film to the immensely popular Capcom video game. So, let's talk about director Paul W.S. Anderson's swan song to the series RESIDENT EVIL: THE FINAL CHAPTER. 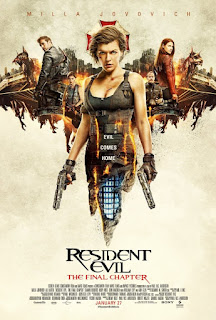 The film's official synopsis: Picking up immediately after the events of RESIDENT EVIL: RETRIBUTION, Alice (Milla Jovovich) is the only survivor of what was meant to be humanity's final stand against the undead. Now, she must return to where the nightmare began - the Hive in Racoon City, where the Umbrella Corporation is gathering its forces for a final strike against the only remaining survivors of the apocalypse.

To be honest, the beginning felt just a bit rushed. We were never really given a full explanation about happened after the events of the previous installment. Nor are we told how the hell Alice survived. Or why did she survive and not anybody else? What happened to her friends? And let's not forget that it ended with Alice and her friends fighting off a horde of T-virus monsters! So how about it Paul? Mmmmm? Care to explain all this? Gonna give us a logical flashback to clarify these drastic questions that moviegoers have been waiting for for the past five years? Nope, you're gonna bypass all that and just start the movie off with Alice waking up and walking around the now destroyed and leveled Washington DC. Great, thanks a bunch Paul! You lazy bloody wanker!!

Anyhoo, Alice is played for the final time by Milla Jovovich, who's starting to show some fatigue from portraying this character for the last 15 years. She can play this role in her sleep. She doesn't bring anything new, still looks hot in black spandex and still kicks a lot of ass, but we've seen it already. There's no real depth to the character (like there ever was one to begin with) and so we're left with this two-dimensional pawn of the Umbrella Corporation who now has to go all the way back to Racoon City to finally stop the Red Queen and Umbrella from eradicating the remaining bits of humankind.

And what did I think of this mindless, soulless, abomination of a movie? I liked it.

While it really needed a more fluid story arcs, better pacing and stronger and more defined characters, it was all that bad. It had some excellent action scenes, cool looking T-virus monsters, Ali Larter is back as Claire (she still looks hot) and I liked how it ended up back at the Hive and the Umbrella Corporation from the first film. Overall, Anderson and his cast and crew did a good job for the most part. What took me out of the film a lot was the overused CGI and some, not all, but some looked really bad. That's one of my big pet peeves: if your film uses a lot of CGI, make sure it looks real and not like it does from the video game.

The cast is average: Jovovich and Larter are bad asses, Dr Issacs (Iain Glen) is still a batshit crazy religious zealot, there's a new little girl playing the Red Queen (Ever Anderson), and the rest of the cast gets killed off so I'm not gonna waste my time on them. Did that sound mean? Well, it's true! They introduce a bunch of new characters and they're all picked off one by one. How are we supposed to care for them, the last of humanity, if you're gonna kill them all? Yup, that's what I thought Paul! You lazy bloody wanker!!

RESIDENT EVIL: THE FINAL CHAPTER is a decent action packed, horror, sci-fi flick to one of the most popular franchises of all time! It doesn't break any new ground and while it's predictable, it's a popcorn film and should just accept that fact and try to have a good time watching it.


RESIDENT EVIL: THE FINAL CHAPTER is still playing at select theaters nationwide. Check your local listings and see if it's playing at a theater near you.

Thanks for reading, and enjoy the show!
Posted by Philip Castor at 3:32 PM