When legendary movie studio RKO released the original KING KONG back in 1933, I don't think they could've predicted just how popular and iconic their creation would become. It's spawned two sequels back in the 1930's, a 1976 remake and a 1986 sequel, he fought Godzilla and other monsters in Japan in the 1960's, became a Saturday morning cartoon, a comic book series and was remade again by fanboy Peter Jackson in 2005. Now 12 years later, Warner Brothers decided to once again resurrect this beloved big hairy ape once again and pit him against one of the best A-list group of actors ever assembled. So are you ready for my review of KONG: SKULL ISLAND?!? If not, tough shit I'm doing this review! 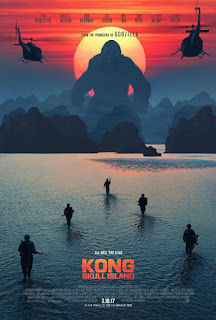 The film's official synopsis: When a scientific expedition to an uncharted island awakens titanic forces of nature, a mission of discovery becomes an explosive war between monster and man. Tom Hiddleston, Samuel L. Jackson, Brie Larson, John Goodman and John C. Reilly star in a thrilling and original new adventure that reveals the untold story of how Kong became King.

Yup, that right there says it all!! Let me cut to the chase: you have Tom Hiddleston (Loki!), Samuel L. Jackson (Bad Ass Mutha Fucka!), Brie Larson (Marry me!), John Goodman (Another Bad Ass!), John C. Reilly (Hilarious!) plus Corey Hawkins (Yo Dre!), John Ortiz (AVPR Dude!), Tian Jing (Babe!) blowing shit up, getting their asses handed to them by King Kong, who then tears shit up by beating up all kinds of crazy looking monsters with a soundtrack that includes Jefferson Airplane, The Stooges, Creedence Clearwater Revival, David Bowie and Black Sabbath?!? Take all of my money now please!!!

But seriously, this a blast to watch. Major credit to director Jordan Vogt-Roberts for making such a kick ass movie. Known previously as a television director on shows such as Single Dad, Funny or Die Presents..., Death Valley and Mash Up, he gained acclaim and attention for his 2013 indie coming-of-age film THE KINGS OF SUMMER. It's amazing that four years later he's directing a multi-million dollar Hollywood film with major stars. It's also worthy noting just how much of a 180 he took when making this film. It doesn't look anything like THE KINGS OF SUMMER and that's astounding to see! Making a little indie film is totally different than making a major studio project so congratulations to Jordan Vogt-Roberts for pulling off this impossible feat!! I can't to see his next film project!!

KONG: SKULL ISLAND is one bad ass action packed adventure film that you need to see on the big screen! Also, for all you film fanatics out there, the movie is also being screened in 70mm special engagements is select cities!! So you have no excuse to not see this movie!! 5 out of 5 stars!! Highly recommended!!


KONG: SKULL ISLAND is currently playing in theaters nationwide. Check your local listings to see if it's playing at a theater near you. Also look for 70mm screenings in select cities as well.

Thanks for reading, and enjoy the show!
Posted by Philip Castor at 3:00 PM