I love horror movies! Ever since I saw Universal's 1931 classic DRACULA, my thirst for horror films has been unquenchable. I've seen an ungodly amount horror films in my lifetime. Some have been brilliant, others have left me scared for life. Some are guilty pleasures, others are WTFs that can never escape me. Today's film falls into the latter portion of my list. Yes horror hounds, I saw THE BYE BYE MAN on purpose and it was really, really, bad. 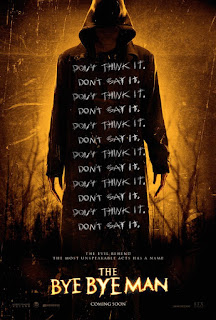 The film's official synopsis: When three college students move into an old house off campus, they unwittingly unleash a supernatural entity known as The Bye Bye Man, who comes to prey upon them once they discover his name. The friends must try to save each other, all the while keeping The Bye Bye Man's existence a secret to save others from the same deadly fate.

OK, where do I start with this one? First the positives: I liked the poster. Looks really cool, doesn't it? Second, it's 96 minutes long so that was nice. Third, it....uhhhh.......has a cool looking poster. Yeah! Oh man, this is going to be harder than I thought.

The film is an adaption of the chapter "The Bridge to Body Island" in Robert Damon Schneck's book The President's Vampire. The screenplay was written by Jonathan Penner, who is married to the film's director Stacy Title. Her resume includes films like THE LAST SUPPER, LET THE DEVIL WEAR BLACK and the hip hop horror anthology HOOD OF HORROR. While I'm for having more female filmmakers in the horror genre, and in Hollywood in general, I would like to see a female filmmaker make a decent horror film. I wasn't impressed with Title's set-ups and compositions. Also, Penenr's script didn't deliver the scares, nor did it have character development, good beats or a satisfying conclusion in the third act. It all felt flat and rushed, which surprised me because  the film's opening really caught my attention. I was looking forward to see what was going to happen but I was disappointed with the final results.

The film's trio of characters are named Sasha, Elliot and John and they are portrayed by Cressida Bonas, Douglas Smith and Lucien Laviscount respectively. As much as I wanted to like their characters, I could have cared a less about them or their final fates at the end. I wasn't emotionally involved with them, which is a red flag in any movie that I watch. Whether it's a drama, a comedy, or a horror movie, if the audience isn't emotionally invested in the film's characters, then you're just wasting their time and intelligence.

The sad thing is that the film had the potential of being a great horror film, maybe becoming a new franchise that would show up the major studios. The trailer looked very interesting to me and I had high hopes for it. I really wanted to like this movie, but in the end it left me feeling like I was cheated. And yet, despite the negative reviews, the film has grossed $24.6 million against its $7.4 million budget. So apparently, the movie has an audience, so right now, I would like to congratulate everyone that worked on the film and all your success. But with all that said,  I am sorry that I did not like the movie.

THE BYE BYE MAN is a lackluster horror film that will bring nothing new to the horror genre! With such a promising and impressive opening, the film falls into the standard trappings of its own shortcomings. However, I am interested in seeing where Stacy Title's career goes and I hope she makes the ultimate horror film, or in another genre for that matter. 2 out of 5 stars! It's a rental at best!


THE BYE BYE MAN is currently playing in select theaters in cities nationwide. Check your local listings to see if it's playing at a theater near you. The film is also available on Blu-Ray, DVD and Digital HD in rated and unrated versions. It's also available on Netflix, iTunes, video on demand and other streaming services.

Thanks for reading, and enjoy the show!
Posted by Philip Castor at 5:14 PM