I recall seeing THE PURGE (the first film) at a special advance screening at the Cinemark Century 20 Oakridge way back in 2013. While I sincerely enjoyed it, I thought it would be a one-off film. Never did I imagine that it would become a horror franchise, and now a television mini series on the USA Network this fall. So this past 4th of July, Blumhouse and Universal Pictures released the latest chapter of the series. Or should I saw prequel. Yes my friends, I went and saw THE FIRST PURGE over at the Cinelux Almaden Café & Lounge. 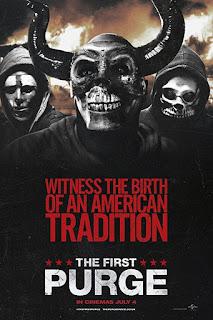 The film's official synopsis: After the rise of a third political party, the New Founding Fathers of America, an experiment is conducted, no laws for 12 hours on Staten Island. No one must stay during the experiment yet there is $5,000 for anyone who does.

Ok, so let me say this about the film. It is, without a doubt, the most ghetto ass horror film of the series!! And I don't mean "ghetto" because the movie takes place in the ghettos of Staten Island, nor because it's cast is mostly African Americans, or that it contains a hip hop/rap soundtrack. None of this means it's "ghetto." I'm calling it "ghetto" because it is one of the most lazy, disenchanting, hollow, horror film I have seen in a long time!! Now, let me explain my disposition.

Given the political and social climate the country is currently in, I am completely shocked that the film doesn't address the issues that are plaguing America today. We are on the verge of a revolution, fighting against the tyranny of the Trump Regime. We are facing trade wars, alienating our closest allies, families being ripped apart, children being kept in cages, environmental polices being undone; this country is coming apart at the seams. Now, with the previous three installments, there was some form of political and social commentary, especially with PURGE: ANARCHY and PURGE: ELECTION YEAR. However, there wasn't any of that in this movie. None whatsoever!! How the hell do you make a PURGE movie and not have any commentary about the state of the country currently?!? To me, that is offensive! Whenever the country falls into despair or when it is under conservative control, horror films have been there to offer not only escapism, but comment on what is wrong with the world. From addressing racism in George Romero's NIGHT OF THE LIVING DEAD to commenting on AIDS in David Robert Mitchell's  IT FOLLOWS, there has been a conscience voice within our films. Whether you agree with the filmmakers or not, you have to respect them for voicing their concerns and opinions! This movie doesn't have a voice!! And that pissed me off!! But wait, there's more!!

The other reason I called it "ghetto" was that it offers nothing to the series, nor to its fans. Screenwriter James DeMonaco's script totally sucked shit; containing no real attributes to help make this movie relatable. The story was awful, there was no real character development and all of them were just basic stereotypes, and the story lacked any real sense of threat or danger. It's hard to believe that this is the same guy that wrote all the other PURGE films, but it felt like he only did this to get a paycheck. It showed in every single frame of the film!

Even more grotesque is director Gerard McMurray's set-ups and compositions, which looked unimaginative, sloppy and amateurish at best. Granted this is only his second feature length movie and his fourth film he's directed (he made two shorts prior to making features), it looked so damn bad that I was completely taken out of the movie almost right at the start. Of course, DeMonaco's lackluster script helped speed up my checking out. How McMurray got the job to direct is beyond me, but his style is still very green.

Overall, THE FIRST PURGE is a total piece of shit, waste of my time type of movie!! I was so looking forward to watching this movie, only to regret my decision immediately after the opening credits!! That's how early I knew that this was going to suck, and how painful it was to sit through the whole damn thing!! So stick with the first three films, and just forget about seeing this in theaters!! But if you really want to see it, then just watch the trailer! 1 out of 5 stars!! It sucked shit!!


THE FIRST PURGE is playing in theaters nationwide, including at the Cinelux Theaters here in the Bay Area. To view showtimes, visit their website at www.cineluxtheatres.com.

Thanks for reading, and enjoy the show!
Posted by Philip Castor at 6:50 PM