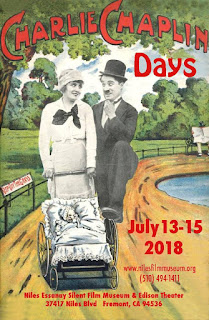 Hello again and welcome back to Day Two of the CHARLIE CHAPLIN DAYS here at the Edison Theater, home of the Niles Essanay Silent Film Museum! There was a lot of activities on Saturday, so let's not waste any time and get right down to it!

WALKING TOUR OF NILES: Led by David and Rena Kiehn, the tour consisted of visiting various locations and landmarks in Niles that the Essanay Film Studios used for their films. From the old building that used to be original location of the studio itself, David and Rena gave a fun and informative tour! Those in attendance also received a Walking Tour of Niles booklet.

BRONCHO BILLY AND THE BANDITS SECRET (2012): In 2012, the Niles Essanay Silent Film Museum produced a two-reel silent western to commemorate the 100th anniversary of the Essanay Film Manufacturing Company arriving in Niles. This inspired our museum curators to create a film as special as our little hamlet. Using equipment and techniques from the silent era and locations that are much like they were over 100 years ago, the film presents a fictionalized account of Gilbert Anderson's arrival in Niles, and how the town sheriff joins forces with the movie gunslinger to bring a group of bandits to justice.

WINDOWS TO THE PAST (2017): A 40 minute behind-the-scenes documentary on the making of BRONCHO BILLY AND THE BANDITS SECRET. Fun Fact: The documentary runs at 40 minutes, which is 10 minutes longer than the film itself.

Then it was time for the Saturday Afternoon Matinees, a series of Chaplin short films, documentaries and a lecture.

THE CHAMPION (1915): Walking along a street with his bulldog, Charlie finds a "good luck" horseshoe just as he passes the training camp of an enormous fighter named Spike Dugan, which states he is seeking sparring partners "who can take a take a punch."

ONE A.M. (1916): After a night on the town, Charlie comes home to the house where he is staying, drunk and unable to find his key. For the next twenty minutes he staggers into, out of, and through the house in an inebriated confrontation with the house itself.

PRESENTATION: CHAPLIN AS A DIRECTOR: Conducted by Professor John Fawell, this informative symposium featured examinations on some of Chaplin's films, including THE KID, THE GOLD RUSH, and MODERN TIMES, his style of filmmaking, comedic timings, and the heart of his films and why they are regarded as not just classic silent films, but works of art in cinema's rich history.

THE MOVIES GOES WEST (1974): a PBS short film hosted by former Essanay actor Hal Angus, who was well in his 80's when he appeared in the film. Angus took us back in time when movies were still being made in Niles while recalling some great information about not only Anderson, but of the Essanay studios and all the fun they had making these silent film classics. We even got to see the old Essanay barn (their first studio in Niles before the state of the art studio was built) before it was condemned and torn down. The old barn door was saved and now it's part of a museum exhibit somewhere.

CHAPLIN LOCATIONS IN HOLLYWOOD AND THE BAY AREA: Moderated by Marc Wanamaker and John Bengtson, this was a fun and interesting talk about some of the areas that Chaplin shot his films for the Essanay Studios in Northern and Southern California. Also discussed where the shooting locations for the films THE KID, THE CIRCUS, and CITY LIGHTS.

Then later that night, it was time for the centerpiece of the celebration with a Chaplin classic:

THE KID (1921): The film stars our favorite Tramp who happens to find an abandoned baby on his morning stroll. He cares for the baby and raises him as his own. Jackie Coogan plays the Kid, who was just five years old when he made the film. Chaplin discovered Coogan on the theater stage and casted him on the spot. Years later Coogan would also be known as Uncle Fester on The ADDAMS FAMILY television show. Purviance also starred in the film as the mother who abandoned her son and regretted her mistake. The film was released to the world on February 6, 1921. The film is highly regarded as on of the finest films ever made in cinema's history. The film was also introduced by Chaplin cameraman Rollie Totheroh's grandson David Totheroh!!

Another fun-filled day at the museum for our CHARLIE CHAPLIN DAYS event! And there was still more fun to come the next day!! To learn more about the Niles Essanay Silent Film Museum, how to become a member, and to view their film schedule, visit their website at http://www.nilesfilmmuseum.org.

Thanks for reading, and enjoy the show!
Posted by Philip Castor at 4:46 PM