Phil sees ANT-MAN AND THE WASP at the Century at the Pacific Commons and XD - July 13, 2018

While the world is still reeling from the aftermath of AVENGERS: INFINITY WAR, Marvel Studios has released their newest film ANT-MAN AND THE WASP to theaters. Usually, I like to celebrate Friday the 13th with a horror movie marathon, but since my girlfriend and I were out and about doing errands, we decided to take in a movie. And since were in Fremont, the Century at the Pacific Commons and XD was close by. And were were going to see it in the luxurious XD theater with the Luxury Loungers and XD Dolby Atmos surround sound!! Yeah, we were going to have a good time today! 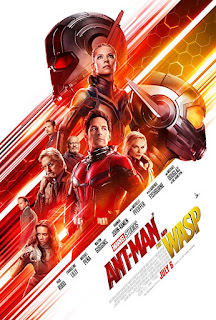 The film’s official synopsis: In the aftermath of CAPTAIN AMERICA: CIVIL WAR, Scott Lang (Paul Rudd) grapples with the consequences of his choices as both a Super Hero and a father. As he struggles to re-balance his home life with his responsibilities as Ant-Man, he's confronted by Hope van Dyne (Evangaline Lilly)  and Dr. Hank Pym (Michael Douglass) with an urgent new mission. Scott must once again put on the suit and learn to fight alongside The Wasp as the team works together to uncover secrets from their past.

The first ANT-MAN was such fun-filled action packed superhero romp, I had high expectations for the sequel. Needless to say, it lived up to the hype, and more. Paul Rudd does a great job as Scott Lang again, bringing his haplessly heroic loser to life once again. But he steps it up immensely, as he’s Hank’s and Hope’s only hope of defeating their newest adversary: Ghost (played spectacularly by Hannah John-Kamen). Both Michael Douglass and Evangaline Lilly return as they lay their emotions out for all to see, as they both discover something (or someone) that they thought was lost forever. And Lilly kicks some major ass in the film! Also returning are Scott’s loveable and goofy friends Luis, T.I., and Kurt. Making his MCU film debut is Lawerance Fishburne as Dr. Bill Foster, an old colleague/rival of Hank’s from his days at S.H.I.E.L.D. Of course, Fishburne is known for portraying Perry White in the DC Extended Universe films like MAN OF STEEL and BATMAN V SUPERMAN: DAWN OF JUSTICE.

Peyton Reed returns to the directing chair for this sequel, continuing what he started in the first film. He finds the right balance of action, humor and character development that pushes the film's story to a satisfying conclusion. But here's the kick: the villain survives (as far as we know) and she may not be a villain in the upcoming MCU films, that is if she survived from Thanos' eradicating half of the universe. Reed is an awesome director, and I hope he stays with the franchise for a very long time!

And since this is a Marvel Studios film, there are two bonus scenes: the mid-credits scene (which ties in directly to AVENGERS: INFINITY WAR) and one at the end of the credits, which I found cute. But this last scene isn't required viewing. And if you have to use the restroom, then go after the mid-credits scene is over.

ANT-MAN AND THE WASP is another MCU action-packed, hilariously funny, superhero popcorn flick that will have audiences and kids rushing to their local theater on these hot summer days!! It's awesome to see what the future holds for this franchise, but let's not forget that we haven't seen the last of Ant-Man, as we now enter the MCU post Thanos, and I cannot wait to see what happens next!! 5 out of 5 stars!! Highly recommended!!


ANT-MAN AND THE WASP is currently playing in both 2D, RealD 3D, and XD in theaters nationwide, including at the Century at the Pacific Commons and XD here in the Bay Area. To view showtimes, visit their website at http://cinemark.com.

Thanks for reading, and enjoy the show!
Posted by Philip Castor at 6:10 PM