Phil attends a special advanced screening of THE PURGE at the Century 20 Oakridge Mall-June 4, 2013

Every now and then I get passes for advance screening of films before they come out. This past Tuesday I was able to attend an advanced screening of the new film THE PURGE, which was held at the Century 20 in Oakridge Mall. After seeing the trailer for it for past couple of months, I was really looking forward to seeing the movie. 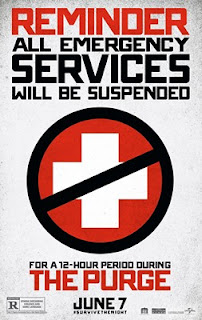 The film's synopsis: Set in the year 2022, in which the United States has become "a nation reborn", with crime and unemployment rates hitting an all-time low. To keep these rates low, the government has instated an annual 12-hour time period called "The Purge", during which people can vent their negative emotions because all crime (including murder) is legal and emergency services are suspended. During one of these free-for-alls, James Sandin (Ethan Hawke) and his family – wife Mary (Lena Headey), teenage daughter Zoey (Adelaide Kane) and younger son Charlie (Max Burkholder) – are tested to see how far they will go to protect themselves when they give refuge to a stranger seeking shelter, and their home is subsequently invaded by a ruthless gang of thugs.

Written and directed by James DeMonaco, the film is an interesting mix of horror, suspense, thriller, and social commentary. The threat of home invasion is true modern horror and it's something that we all fear. But if we're in our home during the invasion, it only makes it ten times more horrifying. How far are we wiling to go to protect our family? Are we willing to kill? To shed blood on our hands? These are some of the questions that are raised within the film.

The other social commentary I noticed was this: We as human beings get angry. If you are not allowed to show our anger, we repress it. But what happens if we can't express this anger for an entire year? How explosive will we become when we are allowed to show this anger? I know that I get angry every day because I work in sales. And if I have a bad day at work, look out! But here in the America of 2022, they are only allowed to get crazy for one night. But some see this annual Purge as a means to eradicate those that plague society's utopia, namely the homeless. So it begs the question: are we using the Purge Night to release out anger and frustration properly or are we using it as a excuse to make the country the way we see fit?

OK enough with the movie analysis! Let's talk about what I thought of the movie!

While Ethan Hawke does an extraordinary job of bring depth to his character James, and it was cool to see Lena Headey's Mary evolve over the duration of the film, I found it somewhat predictable. Maybe it's because I've seen so many horror films, and thrillers, and suspenseful flicks that at some point during the film, I called out what was going to happen next. And about 90% of it I was correct. But both Ethan and Lena have great on-screen chemistry and you believe that they are married. And look for out Australian actor Rhys Wakefield as the film's antagonist Henry! Truly a chilling performance that will give you nightmares! But like I said, I found it predictable. However, don't let this deturate you from seeing the film. If you want to see the film, then by all means go see it!

Overall THE PURGE is a good micro budget thriller that will have you think twice about buying an expensive alarm system. I wouldn't be surprised if people, after seeing the film, run out and by an house alarm. Just make sure it actually works! 3 out of 5 stars! Worth a look!


THE PURGE is currently playing in theaters nationwide, including the Century Theaters here in the Bay Area. To view showtimes, visit their website at http://cinemark.com.

Thanks for reading, and enjoy the show!
Posted by Philip Castor at 8:41 PM