Welcome back to my final day of attending the Frameline37: San Francisco International LGBT Film Festival!! I saw another three outstanding films on Sunday, so sit back, relax, and enjoy my reviews! 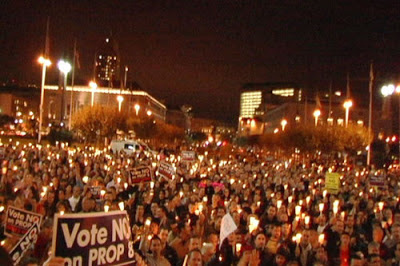 The first film I saw was the documentary THE CAMPAIGN. This locally produced made film chronicled all the hard work and grass roots activism that transpired back in 2008, when the evil Prop 8 Bill was put on the ballot. The documentary showed all the volunteers that worked hard in defeating Prop 8; all their blood, sweat, and unfortunately, their tears. When Prop 8 passed, it devastated the queer community, especially here in San Francisco. The film spotlights those who really made an impact during the campaign.

The film was a painful reminder for me about what happened during that election. Even though the country made progress my electing Barrak Obama as president, the passing of Prop 8 was like a slap in the face! It became clear to me that even though we live in the 21st century, the thought of gays and lesbians getting married was blasphemies. To me the issue was more about civil rights than gay rights. I voted against Prop 8 while members of my own family voted for it. Of course we know how the Mormon church got involved with the Prop 8 campaign and how the used their money to swing the vote for their side. But history has been made and a grave mistake has been corrected. Even as I type this, DOMA has been defeated and Prop 8 no longer exist. Gay and lesbians have been getting married in masses. And I for one am very happy to see all my queer friends get married! After the screening, many of the film's cast and crew participated in a Q&A session. This was such a powerful, moving, emotionally charged film!! 5 out of 5 stars!! Highly recommended!! 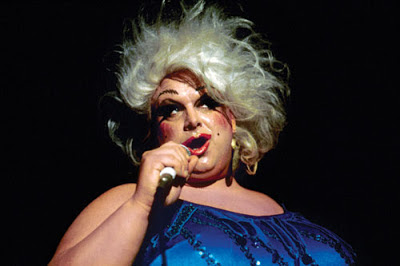 The second film of the day was another amazing documentary. I AM DIVINE tells the story of the beloved Divine, the infamous underground drag queen starlet that rose to fame through the films by his best friend John Waters. Appearing in such classic trash films like PINK FLAMINGOS, FEMALE TROUBLE and LUST IN THE DUST, Divine went from a Baltimore drag queen to Hollywood superstar, thanks in large part to Water's first mainstream film HAIRSPRAY, which garnered her acclaim and attention. But on the eve of Divine's Hollywood debut, she passed away. Those interviewed for the film include Mink Stole, Tab Hunter, Ricki Lake, members of the legendary Cockettes, and of course John Waters.

The film was directed by acclaimed filmmaker Jeffery Schwartz (he made last year's outstanding documentary VITO), and was largely crowdfunded through Indiegogo and Kickstarter. For me, I loved Divine. Ever since I first saw her in HAIRSPRAY, I knew that I wanted to see all her films. She has become a drag icon in the gay community and she and her legacy will forever live on! Many of the film's crew and interviewers were on hand and conducted a Q&A session with the audience. Another  superb and loving tribute to the one and only Divine!! 5 out of 5 stars!! Highly recommended!! 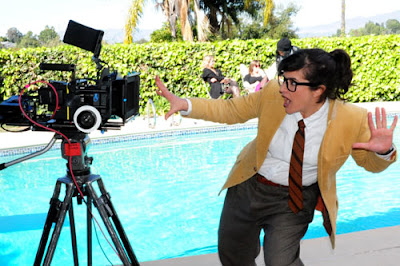 The third and final film I saw on Sunday was the hilarious comedy WHO'S AFRAID OF VAGINA WOLF? Meet Anna (director Anna Margarita Albelo), a forty year old, latino, lesbian filmmaker who lives in her friend's garage and chain smokes while trying her to do list: lose 20 pounds, find a girlfriend, and write the script for her feature film debut. Oh she also dresses up in a vagina costume. When she meets Katia (Janina Gavankar) she finds the inspiration to write her film (but plans to use the film as a way to win Katia's heart). Joining Anna on her madcap adventure are her two best friends, Penelope (Guinevere Turner) and Chloe (Carrie Preston), but things don't work out well for the film or for Anna. Will she able to make her film and make Katia her girlfriend or will she go back to square one all over again?

The film is funny from beginning to end! Anna does a great job at both acting and directing, and seeing Guinevere Turner up on the big screen again was just icing on the cake! Our two leads have great on-screen chemistry (of course it also helps that they've been friends for years) and their comedic timings are outrageously funny! After the film both Anna and Guinevere conducted and interview and a Q&A with the audience. A terrific lesbian comedy that will have you laughing down the aisle! 4 out of 5 stars!! Highly recommended!!

And there you have it! My very first trip to a Frameline Film Festival! I had so much fun at this festival that I'm already planning to attended more screenings at next year's festival. In the meantime, the festival continues until June 30th so there's still time to check out all these amazing films! To purchase tickets, passes, and to view the screenings schedule, visit their official website at www.frameline.org.

Thanks for reading, and enjoy the show!
Posted by Philip Castor at 1:41 PM