Hello there people. So after spending the weekend attending the Hitchcock 9 over at the Castro Theatre, I wanted to see a film that was the complete opposite to a silent film. So after work I went to see MAN OF STEEL over at the Cinelux Almaden Theater over by my house. 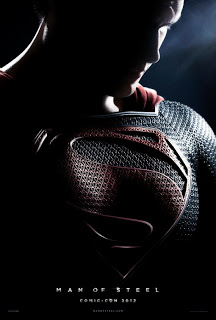 OK, so I said in my original review that I really enjoyed the film. Well, after seeing it a second time, I still enjoyed the film. Now I have been receiving a lot of slack because I liked it. From family members to filmmakers, a lot of people really don't like the movie. My take on this can be boiled down to this one simple statement: it's just a movie. That's it! It's there for my amusement and entertainment. Was I entertained? Yes. Was I blown away by it? Yes. Did it have a good story and interesting characters? Yes. Did it have cool special effects? Yes? Did it offer action, humor, and drama? Yes. So, I liked the movie. Deal with it people!

MAN OF STEEL is currently playing in both 2-D and 3-D in theaters nationwide, including at the Cinelux Theaters here in the Bay Area. To view showtimes, visit their website at www.cineluxtheatres.com.

Thanks for reading, and enjoy the show!
Posted by Philip Castor at 11:28 PM