Phil attends a very special advanced screening of MAN OF STEEL in 3D at the AMC Saratoga 14-June 5, 2013

In December of 1978, my mom took me to see director Richard Donner's SUPERMAN: THE MOVIE. I was five years old and it changed my life forever. From that moment on, I believed that a man could very well fly. Star Christopher Reeve literally flew out of the movie! Since then I've been a huge Superman fan. I started reading the comics at a feverish pace. Eventually I soon saw the sequels as they were released to theaters. Unfortunately, each one was worse than the previous. Shorty thereafter, Superman disappeared from the silver screen. Then in 2006, he returned to the big screen in SUPERMAN RETURNS, which was directed by Bryan Singer (X-MEN, X-MEN 2, and THE USUAL SUSPECTS). While the film had good intentions, it received a lukewarm reception from moviegoers and mixed reviews from critics. These factors caused the film to fail in relaunching the franchise. It looked like Superman's future at the movies was over.

Then in 2010, it was announced that director Zack Snyder (300, THE WATCHMEN, DAWN OF THE DEAD) and producer Christopher Nolan (director of the DARK KNIGHT TRILOGY) were teaming up to reboot the franchise and bring the last son of Krypton back to the big screen. Fans around the world waited in anticipation, myself included. Which brings me to this past Wednesday, where I was standing in line at the AMC Saratoga 14 with my fellow film buff and screenwriter Danny Rubio to attend a very special advanced screening of MAN OF STEEL in 3D! 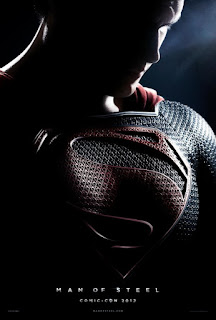 It's interesting to see in this reboot just how much the filmmakers used several ideas and references from the comic book. Unlike the cold, icy planet of Krypton as depicted in Donner's 1978 classic, this Krypton is a perfect hybrid of organics and alien creatures as well as hi-tech battleships and cities. It's here that we are introduced to Superman's parents: scientist Jor-El (Russell Crowe) and wife Lara (Ayelet Zurer). History repeats itself as Jor-El stands before the council about the impending doom of their home planet, but this time we get to see an event that was only mentioned in the 1978 film: the nefarious attempt to overthrow the council by the evil General Zod (Michael Shannon). Once again he and his army are thwarted and they are sentenced to spend forever in the Phantom Zone. But during this attempted coup, Jor-El sends his infant son to the far reaches of space. Soon after, Krypton explodes and Kal-El reaches Earth.

What Nolan and Snyder do differently is that we don't see young Kal-El aka Clark Kent (Henry Cavill) grow. Rather we see him in his youth in a series of flashbacks, like what Nolan used in the DARK KNIGHT TRILOGY. In fact, the beginning of the film features Clack trying to figure out who he is and to find his place in the world. What's this your asking? Superman is suffering from self doubt and ponders his existence in the world? Well, yes. Here we have our lead, our hero, dealing with the issue of self doubt and self discover, which makes him more relatable. However, let's not forget, this is an action packed superhero movie, and when he finally dons his costume, he then becomes Superman. Cavill portrays both Clark Kent and Superman with such convection, strength, and vulnerability. Truly this man was born to wear the suit. He brings a new dimension to this iconic superhero.

Now there's another interesting twist that the filmmakers have made to the film which involves the famous Daily Planet reporter Lois Lane (Amy Adams). Here, she is a Pulitzer prize investigating reporter, and in the film, she does something that the other previous incarnations have never done. Now I don't want to spoil the surprise, but this change was a welcome surprise. For the past 75 years, Lois never put the pieces together to deduce that Clark Kent was Superman, and that made her look a little stupid. Well, Nolan and Snyder has remedied this problem, and I thought it was a brilliant move. Also Kudos to Adams, who turns in a great performance and has great on-screen chemistry with Cavill.

General Zod has never been so evil, and that due in large part to Michael Shannon. Now nothing against Terence Stamp from SUPERMAN II, but Shannon goes over the edge and really makes our antagonist just simply cold, a calculating vicious individual. But in his mind, what he and his minions are doing to the Earth is logical. His mission is to preserve the legacy of Krypton, and he does that with extreme prejudice. Truly one of cinema's greatest villains!

Currently as I am writing this, the film has broken records for the month of June, but there is also a backlash to the film, which surrounds the climatic finale between Superman and General Zod. So before I go any further, let me now issue a MAJOR SPOILER WARNING!!! STOP READING THIS IF YOU HAVE NOT SEEN THE MOVIE YET!! STOP READING THIS RIGHT NOW!!!!

OK, let's discuss the ending, shall we? In case you haven't heard let me just say this outright: Superman breaks General Zod's neck. And he does this because Zod was about to zap a bunch of people and Superman comes to the realization that he had no other way to stop him. So he snapped his neck like a twig and let's out a horrendous scream. Now when I saw the film, and I saw what happened, I will admit I was pretty shocked by that. But then I realized something: In SUPERMAN II, Superman strips General Zod's superpowers, then crushes his hand, picks him up and tosses him to the bottomless pit of the Fortress of Solitude. Plus in the 1980s, Superman used green kryptonite to kill a General Zod from the "Pocket Universe." And let's not forget he was fighting to the death with the creature called Doomsday in the comics back in 1993. So he has killed, but very rarely. A lot of fans and critics are gripping big time about this incident, but remember the SUPERMAN II Hypocrisy!! How was that different than this film?!?

OK now that's over, let me state that I really enjoyed MAN OF STEEL! It was an excellent film, full of superhero action, romance, some humor, alien invasion, and one heluva super battle finale!! After 75 years, it looks like there's no slowing down for this iconic comic book hero!! 4 1/2 out of 5 stars!! Highly recommended!!


MAN OF STEEL is now currently playing in theaters nationwide, including at the AMC Theaters here in the Bay Area. To view showtimes, visit their website at http://www.amctheatres.com.