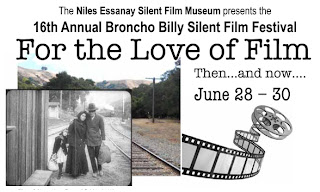 Greetings and salutations everybody and welcome to the third and final day of the 16th Annual Broncho Billy Silent Film Festival! A lot of fun and excitement took place on Sunday, so folks, if you don't mind, let's get this day started!

I arrived at the Edison Theater where I along with over two dozen silent film fans took a WALKING TOUR OF NILES! Led by David and Rena Kiehn, the tour consisted of visiting various locations and landmarks in Niles that the Essanay Film Studios used for their films. From the old building that used to be original location of the studio itself, David and Rena gave a fun and informative tour! Also as an added bonus, David included the locations that he used for his new silent film BRONCHO BILLY AND THE BANDIT'S SECRET!

After the tour, we all returned to the Edison Theater for the next screening. STUNT LOVE is an half hour Australian documentary focusing on stunt pioneers (and real life Hollywood couple) Helen Holmes and J.P McGowan. Interviewed in the documentary were David Donaldson, Richard Maltby, Geoff Mayer, modern day daredevil Zoe Bell. It also contained movie clips and archival footage of this powerful dynamic couple!

The film was introduced Shirley Frietas, J.P. and Helen's granddaughter. And after the screening, their was a discussion about the subject moderated by board member Sprague Anderson and featuring silent film actress and author Diana Serra Cary and author/historian Bob Birchard.

Afterwards there was an hour break, then the fun continued with closing night film! But before the film, Rene announced the winners for the raffle as well as the silent actions that was happening during the festival. Ukulele sweetheart and singer Janet Klien performed a couple of songs (using her ukulele that lights up in the dark), and John Bengston (author of the Silent Echoes series of books) gave a presentation on the various locations that the great Buster Keaton used in tonight's film.

The museum had an encore screening of their new silent film BRONCHO BILLY AND THE BANDIT'S SECRET. At this screening, many of David's family members were in the audience, including of the film's stars: Diana Serra Cary!! After the screening, it was time for the main feature!

SHERLOCK JR. (1924): In the movie Buster Keaton plays a projectionist (and janitor) in a movie theater. However, he's also studying to become a detective. He's also in love with a beautiful girl (Kathryn McGuire), but he has competition in the form of Ward Crane. One day he is accused of stealing his girlfriend's father's watch and thus is told he can never see her again. He goes back to the theater, where he falls asleep and dreams that he's a Sherlock Holmes-type detective, solving the case of who stole a valuable pearl necklace.

This was a clever film-within-a-film movie that really showed off Buster's amazing acrobatic abilities while also creating a witty and loveable character that we all cheer for! Buster directed the film and he did all of his own stunts as well as for actor Ford West (in the scene where the motorcycle he is driving with Keaton on the handlebars, hits a deep pothole and bucks him off flat on his behind). Also, there's the scene where Keaton was hanging off of a tube connected to a water basin. The water poured out and washed him on to the track. It was here where he suffered a broken neck, but he was unaware that he did it. It wasn't until he saw a doctor years later that he discovered this fact out courtesy of a X-ray that he had gotten. The film was released to theaters on April 21, 1924. The movie was selected to the National Film Registry, Library of Congress in 1991.

Well folks, there you have it! Another great festival and another great time at the museum. Remember that the museum has weekly Saturday shows, and they will also be showing Laurel and Hardy talkies on Sunday afternoons. To learn more about the Niles Essanay Silent Film Museum, how to become a member, and view their film schedule, visit their website at www.nilesfilmmuseum.org.

Thanks for reading, and enjoy the show!
Posted by Philip Castor at 11:04 PM