After three weeks of attending film festivals in San Francisco and in Niles, I finally got around to seeing a theatrical released movie! There are so many new releases that I a way behind, so I decided to see the most recent ones. Which brings me to last Tuesday night, when I went and saw the new film WORLD WAR Z. 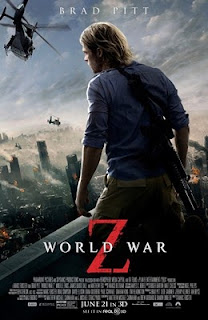 Hollywood star Brad Pitt portrays Gerry Lane, a Former United Nations employee who quit his job to become a full time dad to his two daughter and a full time husband to his beautiful wife Karin (Mireille Enos). While sitting in heavy traffic to their kids to school, Gerry notices that something's amiss. Then he sees an explosion and soon, he sees them. He takes his family to an apartment building to hide until his former UN colleague Thierry Umutoni (Fana Mokoena), the Deputy Secretary-General of the United Nations rescues them. Once safe on a battleship carrier in the middle of the Atlantic Ocean, Gerry is brought back in to help figure out how this virus was caused and where it originated, which put his life in serious jeopardy.

The movie is based on the 2006 novel of the same name by author Max Brooks and it was produced by Pitt's Plan B Entertainment company. Director Marc Forster (MONSTER'S BALL, FINDING NEVERLAND, STRANGER THAN FICTION, QUANTUM OF SOLACE and MACHINE GUN PREACHER) does a great job of creating tension, extreme scares, and horror! He creates a fine balance between the horror of seeing an army of zombies and the times that are quite and introspective. We ponder if the human race will survive. I questioned that throughout the film, and that's thanks in large part to Brooks' terrific directing and pacing.

Now I thought I would never say this, but Brad Pitt was awesome in the film! He showed great depth in his character: he's funny when he needs to be but his look of fear is believable. He's intelligent to the point that we believe that he is that smart. Plus the man kicks ass in the film. This was a physical role for Mr. Pitt. He running a lot, he's chased by zombies, barely survives a plan crash, all the while trying to stop the plague and save humanity. Somebody give this man a medal!!

The film is released in 2D and RealD 3D. Now I was originally going to see the film in 3D, but unfortunately the screening was completely sold out, so I saw it in 2D. After watching it, I am dying to see it in 3D. So hopefully I will be seeing the film again very soon.

Overall WORLD WAR Z is this summer's zombie apocalyptic thrill ride to attend!! It's cool, it's scary, it feel real and it looks like it! For those of you out there who believe that the world will come to an end because of a zombie invasion, don't see this movie. It will freak you out even more than you already are. For everyone else, go see this movie! 5 out of 5 stars!! Highly recommended!!


WORLD WAR Z is currently playing in both 2D and RealD 3D in theaters nationwide, including the Century Theaters here in the Bay Area. To view showtimes, visit their website at http://cinemark.com.

Thanks for reading, and enjoy the show!
Posted by Philip Castor at 7:44 PM