Phil sees THE CONJURING at the Camera 7 Pruneyard Campbell-July 23, 2013

So far this year, there has only been one horror film that has seriously chilled me to the bone, and that was MAMA. It relied more on chills and scares rather than blood and guts. Now don't get me wrong, I love a good gory slasher flick, but I enjoy a cool, spooky, "things that goes bump in the night" kind of film. And after my screening of the supernatural horror film THE CONJURING, I can honestly say that I have just seen this year's best fright film. 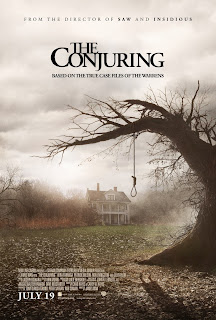 Based on true events, the film's about married couple and paranormal investigators Ed (Patrick Wilson from THE WATCHMEN and INSIDIOUS) and Lorraine Warren (Vera Farmiga from ORPHAN and SOURCE CODE), who must help a family in Harrisville, Rhode Island from being haunted by a demonic spirit. After some research, they discover the origin of the evil spirit and that the mom Carolyn Perron (Lili Taylor from SAY ANYTHING, THE HAUNTING, THE NOTORIOUS BETTIE PAGE ) is its link to the real world. Along with the help of some friends, Ed and Lorraine must fight the evil entity and save Carolyn's soul.

Director James Wan (SAW, DEAD SILENCE) continues with the supernatural angle that he started with 2011's INSIDIOUS. Since the story takes place back I'm 1971, he employs some of the old traits of filmmaking back then; incorporating special lenses, long takes, zooms and pans. Even the font in the opening titles are very 70's. But he's very specific of his set ups, having standard shots during dialogue and then getting wild and crazy as the story progresses, especially when the scares come fast! Of course it helps to have an smart script, and thanks to brothers Chad and Carey Hayes, they deliver one terrifying story!

The production value is top notch, everything from the clothes to the cars, and even Patrick Wilson's sideburns scream 1971! But what's really amazing is that it's the little things that makes the audience scared: the creaking of a door, the give of a wooden floor board, windows and doors slamming shut, the chimes of the grand father clock, it is these simple sounds that sends a wave a fear washing of us. Case in point; at the screening I was at, there were four teenage girls sitting a couple of rows down from me. During the duration of them, they were so terrified that I thought one of them was going to have a heart attack. That's how scary this film is!

The acting in the film was perfect! Lili Taylor is just the constamment actress and it's wonderful to see her in another horror film.She played the part of Carolyn with believability and vulnerability. Again a great performance! Vera Farmiga also turned in a stellar performance as Lorraine; bringing depth and understating to this real life character. And of course, Patrick Wilson is great as always, and it looks like we'll being seeing him again this September in the horror sequel INSIDIOUS PART 2.

Now, I too have done some research and came across some interesting facts about Ed and Lorraine Warren. They were the very first investigators of the now infamous Amityville Horror (yes, THE very same investigation that spawned the 1977 book The Amityville Horror and the 1979 film and 2005 remake). Because of this one case, they garnered world wide attention as well as criticism. However, their contributions to the field of demonology is unmatched. They founded the New England Society for Psychic Research back in 1952, which is also the oldest ghost hunting group in New England. They have trained other future demonologists such as their nephew John Zaffis, plus Dave Considine and Lou Gentile. Unfortunately Ed passed away in 2006, but Lorraine is still alive, and at the age of 86, she still continues to assist with investigations and also runs her private Occult Museum in the back of her house. To see what it looks like, click here to watch this amazing video.

Overall THE CONJURING is, without a doubt, THE best horror film of 2013!! If you're a horror fan and you're sick and tired with the recent bombardments of crappy remakes, re-imagines, and reboots, then you're gonna love seeing this modern day horror classic! This is one hell of a scary movie! You need to see this! 5 out of 5 stars!! Highly recommended!!

THE CONJURING is currently playing in theaters nationwide, including the Camera Cinemas here in the Bay Area. To view showtimes, visit their website at www.cameracinemas.com.

Thanks for reading, and enjoy the show!
Posted by Philip Castor at 8:19 PM