Phil sees THE INTERNSHIP at the Century 20 Oakridge Mall-July 3, 2013

So besides horror films, comedies are another genre that I love t watch. However, I haven't seen too many good comedies as of late. With that in mind, I headed back out to the Century 20 Theater in Oakridge Mall to see the latest Vince Vaughn and Owen Wilson starring comedy vehicle entitled THE INTERNSHIP. 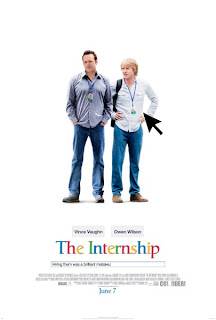 The film's official synopsis: Billy (Vince Vaughn) and Nick (Owen Wilson) are salesmen whose careers have been torpedoed by the digital world. Trying to prove they are not obsolete, they defy the odds by talking their way into a coveted internship at Google, along with a battalion of brilliant college students. But, gaining entrance to this utopia is only half the battle. Now they must compete with a group of the nation's most elite, tech-savvy geniuses to prove that necessity really is the mother of re-invention.

Believe it or not, I really enjoyed the film. First it was funny, which is very important (as the old saying goes, "Dying is easy. Comedy is hard."). If it's not funny, the film is dead in the water. Two, both Vince and Owen already have great on-screen chemistry and perfect comedic timing (they appeared together in the comedy classic WEDDING CRASHERS). It boasts a good script, courtesy of Mr. Vaughn and Jared Stern, and director Shawn Levy (NIGHT AT THE MUSEUM TRILOGY, DATE NIGHT, REAL STEEL) keeps the laughter and the romance coming at a steady pace.

And speaking of romance, the lovely Rose Byrne plays Dana, the fire that makes Wilson's character Nick go weak in the knees. Byrne has been working nonstop! Since 2010, she has appeared (in chronological order) GET HIM TO THE GREEK, INSIDIOUS, BRIDESMAIDS, X-MEN: FIRST CLASS, THE PLACE BEYOND THE PINES, and I GIVE IT A YEAR!! *whew* This is one busy working class actress!! And not only is she a talented actress, and not only is she great in this film, but the woman is just drop dead gorgeous! Men, this woman is a triple threat! Watch out! She will break your heart!!

It was really cool that the movie was shot on location here in the Bay Area. The film mostly takes place at the Google building (located in Mountain View), but there were scenes that took place in San Francisco as well! It was awesome to see locations that I recognized and I found myself saying, "Hey! I know where they shot that scene! I've been there!" By doing this, it gives the film that real world feel, and for those of us who live here in the North Bay, it feels really good our home turf up in a Hollywood film up and projected on the big screen!

While predictable and somewhat clichéd, THE INTERNSHIP is an insightful, romantic and funny little film that does what it was sets out to do: make people laugh and keep them entertained. Well I laughed and was very entertained from beginning to end. Here's a fun summer film to enjoy! 4 out of 5 stars!! Recommended!!

THE INTERNSHIP is currently playing in theaters nationwide, including the Century Theaters here in the Bay Area. To view showtimes, visit their website at http://cinemark.com.

Thanks for reading, and enjoy the show!
Posted by Philip Castor at 9:35 PM