Hello again everybody and welcome to the fourth and final day of my trip to the 18th Annual San Francisco Silent Film Festival! Oh how time flies, especially when you're watching silent movies for the past three days! It was a bittersweet Sunday. Hard to believe that it's all over! *sniff* It's OK, I'm not gonna cry yet. But before I let the fat lady sing, I still have five movies to talk about. So ladies and gentlemen, without any further ado, let's get to the reviews! 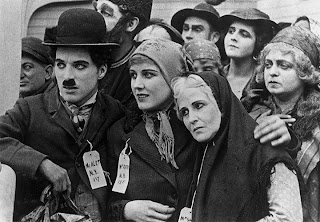 The first program of the day was KINGS OF (SILENT) COMEDY. This particular program is a festival staple, encouraging the whole family to come out and watch classic silent comedies. The program was introduced by board member and film critic Lenord Maltin via pre-recorded video (he was actually at the San Diego Comic Con this weekend. I'm biting my tongue on this topic). After that, it time for the laughter to begin! It's just amazing to hear the theatre filled with children laughing at old silent films. It just proves that there's a reason that these films are timeless classics. The program consisted of four classic comedy shorts:

FELIX GOES WEST (1924): Our favorite silent film feline gets the idea of traveling out west in search of a better way of life. When he gets there, all he finds are bears and Indians! Hilarity ensues!

MIGHTY LIKE A MOOSE (1926):From Hal Roach Studios comes the ver funny short starring funny man Charley Chase. In the film Charley gets his extreme overbite corrected so now he looks rather attractive and somehow unrecognizeable to his wife, who also gets an upgrade when she gets a nose job. The two meet and go out to a party and they don't recognize one another!! Charley is one of the great unsung comedians of the silent film era and it was great to see him up on the Castro Theatre screen!

THE LOVE NEST (1922): The last silent film short that the great Buster Keaton made. In the film Buster gets dumped by his fiancé. Devestatedly heart broken, he moves in on a boat and sets sails. First he's picked up by a pirate ship (he sinks it), then he lands on some sort of platform (cuz he sinks his rowboat that he took from the sunken pirate ship), but the platform is a floating target practice for the Navy (Buster get blown up). However it has a happy ending so don't worry about Buster. He's alive at the end.

THE IMMIGRANT (1917): Charlie Chaplin stars in this short as an immigrant on a very rocky ship that's sailing for America. He meets a beautiful girl on the boat ride, Edna Purviance. They part ways but meet up again at a eatery with Eddie Campbell as the waiter/bouncer who serves them. And poor Charlie is broke!

The amazing Günter Buchwald provided the music for this screening, playing the grand piano and violin. Look for this guy to come back next year! 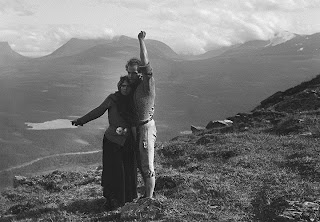 Next up was the Swedish film THE OUTLAW AND HIS WIFE (1918). It is a beautiful and emotional melodramatic feature that's about an outlaw (disguised as a common farmer) who falls in love with a village woman. Once the truth is discovered, they both runaway to the mountains to live the outlaw's life. Years pass and the two know have a daughter and they're living the quite life, living off the land and they're happy. That is until the law comes looking for them, and as a result, they must make a tough decision that will alter their lives forever.

The movie was directed by Victor Sjöström, who also stars in the lead role. He is considered to be the father of Swedish film and is ranked as one of the masters of world cinema. His work highly influenced another legendary Swedish filmmaker; the late Ingmar Bergman. The film was just exquisite! Sjöström captured the beauty and the brutality of the Swedish landscape. This film is one of many films that made him an international star, and it wasn't before long that Hollywood came knocking on his door. Under the name Victor Seastrom, he directed such classics as HE WHO GETS SLAPPED, THE SCARLET LETTER, THE WIND, THE DIVINE WOMAN, and THE MASKS OF THE DEVIL.

It was only fitting that the Swedish Matti Bye Ensemble would provide the musical accompaniment to this amazing film! 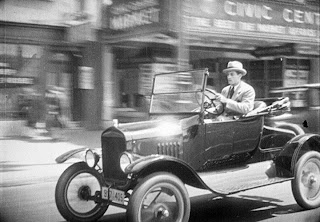 The third film I saw was having its world premiere at the festival! The lost silent film THE LAST EDITION (1925) takes place right here in San Francisco. It tells the story The McDonalds family; the father Tom (Ralph Lewis) works at the San Francisco Chronicle's printing press, his daughter works as a telephone operator, and his son just became a lawyer. But when an investigation into a local bootlegger lands his son in jail due to their evil set-up, Tom has a moral crisis which lands him in jail with his son! So now it's up to his daughter and her reporter boyfriend to help catch the bootleggers so they can clear their name!

This brand new restoration of the film came out of the partnership between the EYE Film Institute Netherlands and the San Francisco Silent Film Festival. Back in 2011, festival president Robert Byrne learned of the existence of the only nitrate print of THE LAST EDITION was in a Dutch film vault. The end result is this historical time capsule that features the great San Francisco in all its glory! The city was finally rebuilt after the devastating 1906 earthquake and it looks brand new. The film has it all: a great story, good acting, an awesome chase through the city, and we see the historic Chronicle building. This screening attracted a lot of attention, and as a result, it completely sold out!!

The great Stephen Horne did the musical score for the film. To be honest, I lost track of what he played during the screening. I know he played the piano, but that's all I remember. 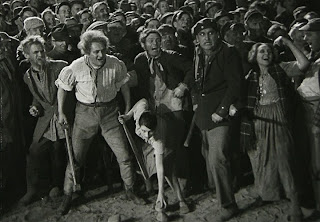 Film number four was the German export THE WEAVERS (DIE WEBER) (1927), which was based on the 1892 play by Gerhart Hauptman depicting the Silesian cotton weavers uprising of 1844. The people of this village are poor and hungry. They are kept this way thanks to the evil Dreisiger family, who pretty much control the cloth trade here. Tired of starving to death and only getting half wages for their weaving, the march onto the Dreisiger manor and completely tear it apart. Unfortunately, the Dreisigers manage to escape, but the angry weavers don't stop there. Next stop is the manufacturing plant were they destrory the very machines that destroyed their lives as well.

Wow!! This is a powerful work of art, depicting the poverty and injustice at its ugliest. The film has been dubbed, "the German POTEMKIN" and the comparison is rightly called for. Director Friedrich Zelnik really does an impecible job of telling the war between the poor and the rich and the idea of change brought on by revolution. Truly one of the greatest silent films I saw this past weekend!

Once again Günter Buchwald provided the music, and he also sang the weaver's anthem! Prior to the screening, the festival screened the two minute trailer of Dziga Vertov's THE ELEVENTH YEAR. Beth Custer and Ken Winokur from the Alloy Orchestra provided the music for this added bonus! 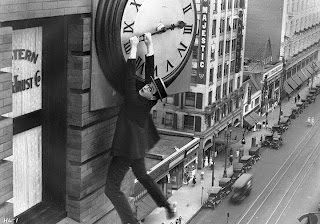 The last film of the night was also the the last film of the festival! SAFETY LAST (1923) stars Harold Lloyd in his most famous and popular film ever. Our four-eyed friend heads to the big city to make it big, but unfortunately comes up short. He lives with his friend (Strother) and can barely eat and pay the rent. When his fiance (Davis) arrives, he pretends to be the manager of the department store he works at. Desperate for money for his wedding, he convinces his boss to pull off a publicity stunt to attract more customers to the store so he can claim the $1000 bonus. With his pal being chased by a police officer (Young), it's up to Lloyd to climb the outside of the department store!

The image of Lloyd hanging on to the clock while hovering above traffic is one of the most iconic images in not only silent film history, but of film history in general. Whenever you open up a book that talks about the silent film era, you will see this picture. Lloyd was one of the "Big Three" comedians from the silent era (the other two being Charlie Chaplin and Buster Keaton). Even 89 years after the film's release, it is still being played to sold out crowds (like tonight) and it can be found on many top ten lists by both critics and fans. A true comedy classic that still stands the test of time!

Providing the musical accompaniment for this screening were my good friends the Mont Alto Motion Picture Orchestra, who once again knocked it outta the park!! Another standing ovation!! Preceding the screening, festival artistic director Anita Monga conducted an interview with visual-effects expert Craig Barron and Suzanne Llyod, Harold Lloyd’s granddaughter!

Well folks, there you have it! Another SF Silent Film Festival has come to a close. I just want to say "hi" to all my friends that I got to see again, and to all my new friends that I meet this year, I cannot wait to see you all again at next year's festival (which will be on Memorial Day weekend May 29th-June 1st)! I had so much fun this past weekend! Now if you'd like to learn more about the SF Silent Film Festival, and how to become a member, visit their website at www.silentfilm.org.

Thanks for reading, and enjoy the show!
Posted by Philip Castor at 5:36 PM