Howdy folks and welcome back to Day Three of my trip to the 18th Annual San Francisco Silent Film Festival!! On Saturday I saw SIX programs! Yup, I had a long day ahead of me! Once again I hit up Orphan Andy's with my buddy Jason Wiener from Jason Watches Movies. Then it was back to the Castro! So sit back, relax, and enjoy reading my reviews! 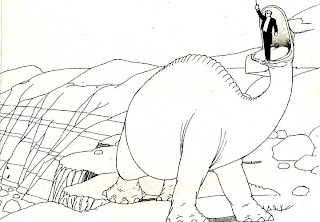 The first program of the day was entitled WINSOR McCAY: HIS LIFE AND ART. Narrated by Academy Award winning animator and author John Canemaker, this wonderfully amazing and highly informative presentation chronicled the career of Winsor McCay, one of the greatest American cartoonist and illustrators of all time! John talked about Winsor's early cartoon strips he created like Rare Bit Fiends, but it was with Little Nemo in Slumberland that he achieved world wide acclaim. In between his comic strips and his vaudeville shows, he was pushing the boundaries of cartoon animation. During his presentation, John screened McCay's first four cartoons: LITTLE NEMO (1911), HOW A MOSQUITO OPERATES (1912), GERTUE THE DINOSAUR (1914), and THE SINKING OF THE LUSITANIA (1918). These films (as well as his later ones) would help cement McCay's legacy as one the pioneers of animation. His influence on Walt Disney, and others are evident in their work. Canemaker's presentation was outstanding!! 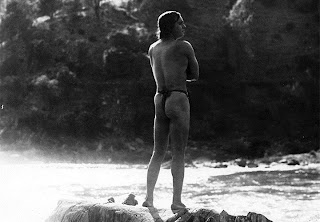 The first actual film of the day was the restoration screening of the Douglas Fairbank's film THE HALF-BREED. Now if you recall, I attended the AMAZING TALES FROM THE ARCHIVE presentation yesterday where festival president Robert Byrne talked about the restoration of this lost silent film. Just in case you forgot, the restoration was culled from three different print sources: a 35mm print from both The Library of Congress and the Cinematheque Francaise (which partnered with Robert with this project) and from a 1926 16mm film print from Lobster Films. These three sources helped bring the film back to life once more.

Ok now let's talk about the film itself. Douglas portrays Lo, or Sleeping Water, who's mom was Indian and his father was a white man (however his identity is unknown to him). After his adoptive father dies, some miners force him out of his home and he winds up in a small mining town. There he meets the town pastor's daughter Nellie Wynn (Jewel Carmen), who takes a liking to the half breed. Much to the displease of the town's Sheriff Dunn (Sam De Grasse), who's on the hunt of would-be murder Theresa (Alma Reubens). Both Lo and Theresa form a friendship so they can survive being hunted down by the sheriff, townsfolk, and a wild forest fire!

This was a interesting film to watch for several reasons. The first being that this was quite a departure for Fairbanks. At this point in his career, he was known for his romantic comedies and light dramas. Also, he played the role of Lo very conservative. Usually Fairbanks' characters are out going and he's smiling and showing off his acrobatic skills and whatnot. Here, he's standing with his arms crossed and looking serious. Not a very charismatic character by any means. Needless to say that the film bombed when it was released. But now seeing it some 100 years later, we see him trying to take a chance and do something different. While not a terrible film, it's an important piece of history in Fairbanks's rich legacy! 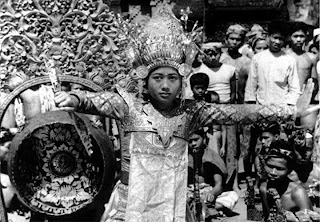 The second film I saw was LEGONG: DANCE OF THE VIRGINS (1935), which was filmed on location in Bali. The film's about a young girl named Poutou who's a Legong dancer. She falls in love with a young musician named Nyoung and she chooses him to marry. Her father is very happy and excited for his daughter, however there arises a problem. Nyoung falls in love not with Poutou, but with her younger sister Saplak. Soon Poutou falls into a deep depression and feels there's only one way to end her pain.

The film was one of the very last films to be shot in two-strip Technicolor: red and green. Now I've seen this film before and I really enjoyed the simple storytelling combined with its exotic locations. Plus the film uses real natives as the leads, so it makes the movie that more realistic (and yes, there were a lot of exposed breasts in the film. Get over it. They're natives and that's how they dress. Or that's how they half dress.)! The film was directed by Henry de la Falaise, husband to Constance Bennett and the ex-husband of Gloria Swanson (small world). The film is a rare gem in the silent film world and I am very lucky to have seen it once again.

Providing the musical score was Gamela Sekar Jaya and the Club Foot Orchestra and it was conducted by Richard Marriott. These guys literally blew the roof off of the Castro Theatre. Theie performance was unbelievable! After the screening, the audience gave them a standing ovation that lasted for well over a minute and a half! 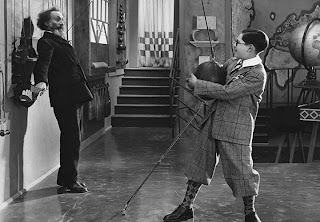 Up next was the Italian comedy GRIBICHE (1926) and it's about a young boy called Antoine aka Gribiche (Jean Forest). He lives with widowed mom (Cécile Guyon) in the lower middle class section of Paris. Then one day he meets a widowed American lady named Mrs. Maranet (Françoise Rosay). She takes pity on the young lad, so she adopts him so she can give him a proper education. But our young friend doesn't really take to this new world of higher education, and begins to rebel while missing his old life and his mom.

This was a cute little film, but it didn't really appeal to me. First, I thought the film ran way too long. If it was about a half hour shorter, then it would be better. Second, while it was supposed to be a light-hearted comedy, I felt there wasn't enough comedy in it. Sure it had its moments, but those moments were few and far between. However I did enjoy the acting, and the cinematography was good, but thought the story could've been tighter, thus making the film shorter. But what do I know, I'm just a wannabe film critic.

Providing the musical accompaniment was the great Monte Alto Motion Picture Orchestra, and once again they were amazing! Really a beautiful score! 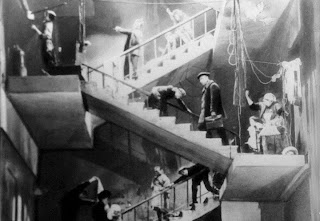 Film number four was the hilarious Russian comedy (now that's an oxymoron!) THE HOUSE ON TRUBNAYA SQUARE (1928) and it focuses on a young farm girl who goes to Moscow (with her pet duck) in search of her missing uncle. And this is where the fun begins! She meets an old friend and stays with him, then gets a job as a housekeeper (over there they're called indentured servants), joins the local union, marches to get people to vote, and a bunch of other funny stuff happens. The film pokes fun at some real social topics such as housing projects, the mistreatment of women, union rights, and the idea of self discovery. You gotta love Russian propaganda comedies! But I would like to take a moment now to bring to light a major flaw that I found in the film.

So my major complaint about the film can be summed up in one sentence: what the hell happened to the duck?!? I mean really? You introduce the duck as a major character in the film. Out peasant girl brings her all the from the farm to the big city of Moscow, the duck almost becomes roadkill by a cable car, then we see the duck just chilling at her friend's house, and that's it! What happened to the damn duck? Did it fly away? Did it get eaten? Did it become a Disney character? I mean, this is a major plot-hole in the film. And I for one cannot believe that this was left open.

And oh, by the way, the film was brilliantly directed by Boris Barnet, who's largely overlooked but at the time, he was on par with Sergei Eisenstein. And the "One Man Band" Stephen Horne povided the film's score! 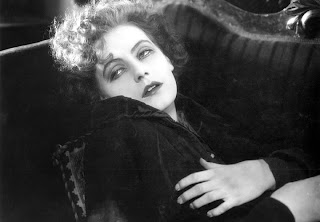 The last film of the day was the German drama THE JOYLESS STREET (DIE FREUDLOS GASSE) (1925). This was director G.W. Pabst's third film and was severely edited twice by the German censors it was released. The film takes place in Vienna after the first World War and focuses on both the hungry and the poor and the rich and powerful. To try to explain the plot would be very complicated since there's so much going in the film (it ran for over two and a half hours) but let me say this: it's social commentary about social classes is still relevant to this day.

I'm a fan of  G.W. Pabst and I enjoy a lot of his films, but this one was a hard film to watch. It a depressing film. I mean really depressing. I don't know what country makes better depressing films, Germany or Russia? Pabst is one of Germany's greatest directors who have ever lived (others include F.W. Murnau, Fritz Lang, and Richard Oswald). To see this film was fascinating, but it's without a doubt THE most depressing film I have ever seen screened at the SFSFF!

The Matti Bye Ensemble scored the film, which was really extraordinary! Definitely a performance for the ages!

And that was Day Three of the festival! Only one more day left people! The festival ends this Sunday, July 21st! To view the festival's film schedule, purchase tickets and passes, location of hotels to stay at during the festival, please visit their official website at www.silentfilm.org.

Thanks for reading, and enjoy the show!
Posted by Philip Castor at 1:29 AM