You want to know something? Kids movies are a lot of fun to watch! It reminds me of when I was a young and my folks taking me to see all those awesome kids movies that I now look back with fond memoriance. Nowadays, kids movies (or called family films) have become even cooler, thanks to computer animation and 3D effects. But in the end it all comes down to the story and the characters. Are we being entertained? Do we care about the characters? Are we having a good time watching the movie? Well, after seeing the new family film DESPICABLE ME 2, I can say yes to all three questions. 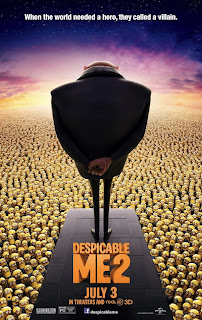 A secret laboratory in the arctic (developing a super secret serium) has just been stolen by a new mysterious villain. In need of assistance, the Anti-Villain League (or A.V.I.) sends out their top agent Lucy Wilde (voiced by Kristen Wiig) to recruit former evil villain Gru (voiced by Steve Carell) to help them save the world from this super evil genius.

I liked this film better the first one. For starters, thanks to screenwriters Ken Daurio and Cinco Paul, this film has a much better script and better character development, which I thought the first one lacked. Gru's personality is enhanced, especially with the chance of saving the world. Plus being teamed up with Agent Wilde, we get to have a love interest that will take Gru to the next level. And having him be the hero gives the film a dimension, thus propelling the character to new realms.

The film is packed with action and laughter, mostly from the scene stealing Minions, which are super funny, cute, and adorable! One dresses up like a French maid (oh-la-la), one looks like a fireman, one looks like a firetruck (see trailer), and one looks like Carmen Miranda! OK, what kid born in the last ten years will get that joke? Not one of them, but for us adults, we'll get that reference because we grew up watching that same joke in all the old Looney Tunes cartoons we used to watch back when we were kids. See, that's the beauty of cartoons. Some jokes are for the kids, and some are for the adults.

Also looks for references to Saturday Night Live, The Village People, lucha libre wrestling, and an Minion karaoke version of All 4 One's "I Swear." It's really, really hilarious!

Now I saw the film in standard 2D version, so I cannot comment on what the 3D effects looks like. But since it's a well written, well directed, very funny film, then you probably won't need to see it in 3D. But if the kids want to see it that way, then go for it. They will love you for it.

DESPICABLE ME 2 is guaranteed fun time at the movies! If you're tired of the heat that's sweeping the nation, take the whole family out to see this movie! And remember to switch your brain from adult to kid. That way you'll be able to enjoy it more with your family! 4 out of 5 stars! Recommended!!

DESPICABLE ME 2 is currently playing in both 2D and 3D in theaters nationwide, including the Camera Cinemas here in the Bay Area. To view showtimes, visit their website at www.cameracinemas.com.

Thanks for reading, and enjoy the show!
Posted by Philip Castor at 9:57 AM