Happy 4th of July everybody!! So it's been a long time since I frequented the Camera Cinemas; San Jose's oldest independent theater chain. So today I decided to correct this by heading out to the Camera 7 in the Pruneyard Campbell to see MONSTERS UNIVERSITY, the latest film by the folks over at Disney/Pixar. 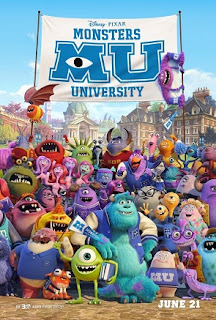 The film's official synopsis: Mike Wazowski (Billy Crystal) and James P. Sullivan (John Goodman) are an inseparable pair, but that wasn't always the case. From the moment these two mismatched monsters met they couldn't stand each other. "Monsters University" unlocks the door to how Mike and Sulley overcame their differences and became the best of friends.

The film is a prequel to MONSTERS, INC., which was a huge hit when it came out back in 2001. Now 12 years later, we get to know the origin of how one of the greatest monster duos of all time meet, and the obstacles they faced, like not being friends!

Crystal and Goodman return once again to their signature characters and they bring the funny like no other! However, in this film their friendship doesn't exist. Rather, they sincerely dislike one another. Gasp!! Mike and Sulley aren't friends?!? Stop the madness!! Well it's true, but that's we the fun lies. We see the roots of these soon-to-be-famous monsters.

In the film's prologue, we see little Mike with his classmates as they visit the historic Monsters, Inc. Here is where Mike decides to become a scarer when he grows up. So we see him study hard, practicing his scares, hitting the books, he is the ideal role model for the perfect student. On the other end of the spectrum is Sulley, who just coasts through school riding on the coattails of his legendary family's name. But it only gets him so far, especially when the very intimidating Dean Hardscrabble (Helen Mirren) threatens him with expulsion from the program, and soon from the university. However, she doesn't believe that Mike has what it takes to be in the program as well. Soon these two monsters, along with their new friends in their college fraternity, Oozma Kappa (the biggest group of losers in the whole school), must compete and win in the university's annual Scare Games (think HUNGER GAMES and that Triwizard tournament in HARRY POTTER AND THE WIZARD'S GOBLET) in order to stay in school as well as in the scarer program.

The film's story is full of fun, laughs, and of course, hilarious monsters. But there is an underlined message to be found in the frames, and that message is to always believe in yourself. Even if your friends, or teachers, or your peers at work, if you believe in yourself, you cannot fail. The only way to fail is to doubt yourself. And I thinks that's a great message to covey to kids!!

The computer animation is just out of this world. Even though the film takes place in the monster world of Monstropolis, the rending of the college and the enviornment look so freaking realistic! The trees, the buildings, the grass, the cars and buses, the houses, everything in the film looks so damn real! Computer technology has grown so fast since the first film, it's hard to imagine just what the future holds for these two monsters. What will they looks like if Pixar decides to make a part three?

The theater was only showing the film in standard 2D. So I am making plans to see this film again but in 3D! Yup, I should be seeing this again real soon!

Overall MONSTERS UNIVERSITY is funny, entertaining, and heart warming film that the whole family will no doubt enjoy! Beat the heat and head out to your local theater and stay cool by watching this great movie! 4 out of 5 stars!! Recommended!!


MONSTERS UNIVERSITY is currently playing in both 2D and 3D in theaters nationwide, including the Camera Cinemas here in the Bay Area. To view showtimes, visit their website at www.cameracinemas.com.

Thanks for reading, and enjoy the show!
Posted by Philip Castor at 8:33 PM