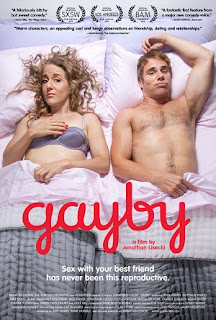 When I attended last month's Frameline 37 Film Festival, I saw some of the very best queer films I have ever seen. These films were funny, touching, shocking, educational, but above all, they were made by some of the most talented filmmakers out there. Today's movie review had the pleasure of being the Closing Night Film at last year's festival, and it's been distributed by the fine folks over at Wolfe Video (located right here in my hometown of San Jose). While comedic and heart warming at the same time, GAYBY also touches upon a subject that is very relatable regardless of sexual preference.

Straight yoga instructor Jenn (Harris) and gay comic book store owner Matt (Wilkas) have been best friends since college. Now being in their 30's, they're starting to feel old, especially Jenn, who really wants to have a baby. Problem is that she has no boyfriend and no potential suitors. Matt is also single and still trying to get over his ex-boyfriend. In the end, Jenn proposes to him their old plan of having a baby together....the old fashioned way! While preparing for parenthood, they both continue dating in an attempt to try to find love and happiness, but will it ruin their plans of having a baby together?

Both Harris and Wilkas have great on-screen chemistry together, playing off one another with precise comedic timing and flawed vulnerability which makes them relatable and believable. We know people like these in our everyday lives. They work with us, they're our friends and neighbors, and our relatives. Harris's Jenn looks, talks, and acts like a normal woman who is desperate to have a child of her own. Also, Ferver and Lisecki as Jenn and Matt's gay best friends bring so much comedic relief that I almost died laughing everytime they came on screen! These guys are hilarious!!

Now the film is based on a short that Jonathan Lisecki did a couple of years ago. Here, we see the continuation of that short, expanding the characters and the situation that ties everyone together. Here is a film that is both funny and romantic, but I wouldn't label it as a romantic comedy. It transcends the normal formality of labeling and really distinguishes itself as a uncategorized movie. It's queer, it's funny, it's silly it's romantic, it's sad, it's topical, it's everything that you the audience projects into it. Therefore, you cannot label the film; by doing so, you're limiting its potential and visibility as a crossover film.

The film has been screened at numerous film festivals, such as the Los Angeles Film Festival, SXSW, and of course Frameline 36. It has also won several Best Film awards, including from Out On Film Atlanta LGBTQ Festival and Boston Independent Film Festival.

The DVD has some cool bonus features: audio commentary, deleted scenes, previews, and the original GAYBY short I mentioned earlier.

GAYBY is one of my favorite DVD releases of 2013 thus far! It's wildly entertaining, full of interesting and believable characters, laugh out loud funny, and touching as well. This is one of the best LGBT films I've seen in a while! 5 out of 5 stars! Highly recommended!!


GAYBY is currently available on DVD at your local retailer. You can also purchase a copy at the Wolfe Video website at www.wolfevideo.com.

Thanks for reading, and enjoy the show!
Posted by Philip Castor at 6:25 PM