This past Wednesday night I finally got around to seeing the new horror film YOU'RE NEXT, which has received quite a lot of hype prior to its release. Now the movie was actually filmed in 2011 and it toured on the festival circuit and received numerous praises (which is where I first heard about the film), but it didn't a wide release till this month. So after waiting patiently for the last two years, I went and saw it. What did I think of it? Glad you asked. 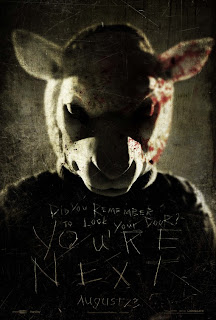 So here's the plot in a nutshell: The Davison family heads out to a beautiful remote home near the woods for a wedding anniversary/family reunion. But when they come under attack by a vicious gang of masked killers, it's up to an unlikely family guest to take them all down.

The film is basically a slasher film disguised as a crime thriller. But let me just state that, in my humble opinion, the movie doesn't try to be scary at all. Rather, it's very reminiscent of the old 80's slasher films I used to love to watch. First off, the film has some really great kills, some of which I have never seen before. Want an example? OK how about seeing someone get their head bashed with a blender, then turning it upside down, sticking it on top of said head, then plugging it in and turning it on, thus making a very bloody brain shake! Yup, that was a new one for me!

Second nod to the 80's horror films was the ultra cool retro soundtrack! In the beginning, the soundtrack is classical, with strings and whatnot. Then by the second half of the film, it sounds like someone brought in an authentic 1986 Casio keyboard! Soon I found myself rocking out to it!Seriously, I didn't see that one coming either!

Third, the film didn't take itself too seriously. Unlike the other home invasion horrors like THE STRANGERS and this year's THE PURGE, the movie became somewhat funny, a little campy, but in the end, it was fun too watch! There were numerous parts in the film where I found myself laughing because I was amused with its absurdity. But credit goes to its female lead and heroine Sharni Vinson who plays it straight and serious while being surrounded by all this fun and crazy death. Also, she's hot, sexy, and I love her Australian accent!

Overall, YOU'RE NEXT is not a serious, scary, horror film that the trailers and commercials make it out to be. Rather, it's a fun, cool, gory, and entertaining flick that it's OK to see! So this is definitely a movie to see in the theater, and I predict that this will be really popular when it comes out on the media outlets. Three out of fun stars! Worth a look!

YOU'RE NEXT is currently playing in theaters nationwide, including at the Cinelux Theaters here in the Bay Area. To view showtimes, visit their website at www.cineluxtheatres.com.

Thanks for reading, and enjoy the show!
Posted by Philip Castor at 11:23 PM