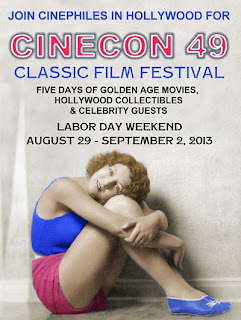 Hello and greetings from Hollywood!! Yup, I'm back in Tinseltown once again for my vacation and I'm also staying with my very good friend and filmmaker Maureen "Mo" Whelan while I'm here for the week. I arrived into town early Saturday afternoon. After I got settled in at Mo's place, I made my way to attend the 49th Annual Cinecon Classic Film Festival, held at the world famous Grauman's Egyptian Theater in the heart of Hollywood! The festival started back on Thursday, so I missed a couple of days as well as some of the films from earlier Saturday. However, I did see a lot still, so let's get the show underway!

The film I saw was TRANSIENT LADY (1935). The film's official plotline: Nick Kiley, Chris Blake and Dale Cameron set up a transient roller-rink in a small town in the American south, filled with red-necks and louts, most of which are related to each other. One of the Baxter boys makes some crude suggestions and remarks reference Miss Cameron, which results in a squabble. One of the rink-partners shoots one of the Baxter rubes quite dead, and blows town. The dead Baxter is the son of State Senator Hamp Baxter, who takes a dim view of transients who come to town and shoot one of his sons. The rink-partner who stayed behind is blamed for the killing, and lynch mobs are on the horizon. Local attorney Carey Marshall, in love with Dale Cameron, takes on the task of defending the innocent man.

OK, this was THE MOST RACIST FILM I HAVE EVER SEEN!! Holy crap!! And I thought BIRTH OF A NATION was racist! The way African Americans were portrayed was appalling, it upheld the idea that Southern folks are ignorant, redneck idiots (OK maybe that may still be true), and it was full of other stereotypes. But you have to remember, this was where society was back then. This was the status quo and it's hard to fathom that today. We've progressed so much since then. The film was interesting to watch to say the least. The film was originally released by Universal Pictures on March 4, 1935.

Next up was the silent film MARE NOSTRUM (1926) and it's about a young Spaniard named Ulysses Ferragut (Antonio Moreno) who is seduced by the beautiful (and German spy) Freya Talberg (Alice Terry) into helping her by using his boat (the Mare Nostrum) to help refuel a German U-boat. However, Ulysses tells the captain of the U-boat that they must not sink any passenger ships. Unfortunately, they do fire on a passenger boat and kill everyone on board, even Ulysses' son Esteban. Stricken with grief and hatred, he curses Freya's name, but when they meet again, their reunion is short lived.

The film was based on the novel of the same name by Vicente Blasco Ibáñez. It was directed by Alice Terry's husband, actor, producer, and producer Rex Ingram. The film itself is a beautiful and tragic drama, and I was really impressed with it! The film was thought to have been lost, but thankfully, it was rediscovered and restored so it could be shown here! The film was originally released by MGM on February 15, 1926.

After a hour and a half lunch break, the festival continued with:

THEIR FIRST EXECUTION (1913): This short comedy is about a prison that just installed their first electric chair and are about to execute their first prisoner. Unfortunately he escapes and the two bungling guards who let him escape are on his trail along with two other detectives. When one puts on the prisoner's coat and hat, the two dumb guards knock him out and put him in the electric chair! Yup, this was a very sadistic film! The short was released by Keystone Film Company on May 15, 1913.

Next was the hilarious comedy SUDDENLY IT'S SPRING (1947). Husband Peter Morley (Fred MacMurray) meets his returning wife Captain Mary Morley (Paulette Goddard), WAC marital-relations expert, to ask her to sign their divorce papers so he can marry his new girlfriend  Gloria Fay (Arleen Whelan). However, Mary is still in love with Peter and is determined to save her marriage, even though Peter's client Jack Lindsay (Macdonald Carey) is determined to help end their marriage so he can make Mary his girlfriend!

This was one of the funniest films I have ever seen! First off, the chemistry between the four leading actors is stupendous! However, both MacMurray and Goddard were just outstanding in their respected roles! Second, Mitchell Leisen's directing was fantastic, capturing the serious and the hilarity. Third, the production value was excellent, but what would expect anything less from a studio like Paramount Pictures? Truly a Hollywood classic! The film was released by the fore mentioned Paramount Pictures on February 13, 1947.

The last film I saw was the comedy HOLD 'EM YALE. Beautiful socialite Helen (Jeanette Loff) is romanced by the suave Latin lover Rod La Rocque (Jaime Emmanuel Alvarado Montez ), who, along with his monkey, follows her all the way from South America to Yale! (Can you say stalker?) Determined to win her heart, he studies hard and joins the Yale football team where he becomes a big star, but can he win her heart forever?

The film was produced Cecil B. DeMille and was based on a 1906 play called AT YALE by Owen Davis. It was a joint effort between DeMille Pictures and Pathe. Jaime Emmanuel Alvarado Montez was very good and funny in the movie and Jeanette Loff was a very striking woman! The film was cute, sweet, funny, and enjoyable to watch. The film was released by Paramount Pictures on May 14, 1928.

What a day I had! And there's more films to watch for the next two days!! Yup, this is what being on vacation is all about! To learn more about the Cinecon Film Festival, visit their website at www.cinecon.org.

Thanks for reading, and enjoy the show!
Posted by Philip Castor at 8:06 PM