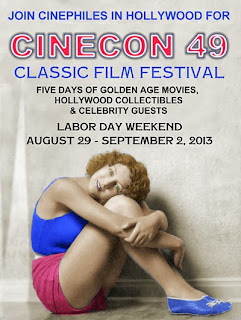 Greetings and salutations everybody and welcome to the fifth and final day of the Cinecon 49 Film Festival at the Grauman's Egyptian Theatre in the heart of Hollywood! I saw another seven films on Monday, which was a great way to spend my Labor Day! So let me talk about all the films I saw!

WET AND WARMER (1920): This silent comedy short film stars Billie Ritchie as the "Mysterious Stranger", Charlotte Dawn as May Time, and Albert Ray as Billy Poste. The film was directed by Henry Lehrman who was at one time one of the biggest comedy producers of the Teens. This short was one of only five films he produced for his own company Henry Lehrman Comedies ans was released in December of 1920.

CASTLES FOR TWO (1917): According to the Cinecon program, "American heiress Marie Doro (Patricia Calhoun) returns to the old sod to find the fairies and the leprechauns of her grandmother's stories. There she meets Elliot (Brian O'Neil), who thinks she's poor and falls in love. But Elliot's sisters remind him that they need a real pot of gold to save the family estate from foreclosure. In order to avoid being pursued for her money, Marie has her maid play herself. But in the end, true love come through."

This silly and heartfelt silent film was written by Beatrice DeMille, mother of legendary director  Cecil B. DeMille and his brother director/writer William C. DeMille. Director Frank Reicher is most famous for his role as Capt. Englehorn from KING KONG and its sequel THE SON OF KONG (both from 1933). This film was released by  Jesse L. Lasky Feature Play Company on March 5, 1917.

THE RETURN OF SHERLOCK HOLMES (1929): The man himself Det. Sherlock Holmes (Clive Brook) comes out of retirement to solve his last, and greatest, case ever! Involving murder kidnapping, double cross, and a secret weapon that could alter the balance of power, Holmes's investigation leads him face to face finally with his old adversary Professor Moriarty (Harry T. Morey).

This was the very first talking Sherlock Holmes film. And this was a fascinating film to see and hear! Clive Brook is a fantastic Sherlock Holmes, showcasing intelligent, stamina, ingenuity, confidence, everything the made this legendary detective famous for. H. Reeves-Smith was really good as Dr. Watson and Harry T. Morey portrayed Holmes's nemesis with unfathomable evil. The film was released by Paramount Pictures on October 26, 1929.

After our lunch break, it was time to see the last four films of the day...

SPRING PARADE (1940): The film's official synopsis: an Hungarian woman named Ilonka Tolnay (Deanna Durbin) who attends a Viennese fair and buys a card from a gypsy fortune teller which says she will meet someone important and is destined for a happy marriage. Soon after the woman gets a job as a baker's assistant and meets a handsome army drummer Corporal Harry Marten (Robert Cummings) who dreams of becoming a famous composer and conductor, but is held back by the military which discourages original music. Wanting to help the army drummer, the woman sends one of his waltzes to the Austrian Emperor with his weekly order of pastries, which leads to the tuneful and joyous fulfillment of the gypsy's prediction.

What I loved about the film was its sheer innocence. It was a romantic comedy that really had heart. Both Durbin and Cummings had great on-screen chemistry which elevates the film to become a classic. Really a great joy to see! The film was originally released to theaters by  Universal Pictures on September 27, 1940.

CHINA (1943): The film's official synopsis: Shortly before Pearl Harbor, American opportunist Jones (Alan Ladd) and partner Johnny (William Bendix) are in China to sell oil to the invading Japanese army. Cynical about the sufferings of the Chinese, Jones meets compassionate teacher Carolyn Grant (Loretta Young) while traveling cross-country to Shanghai. Sparks fly between these strong-willed characters, neither budging an inch. But when Jones witnesses a Japanese atrocity, his feelings toward his customers (and Carolyn) begin to change.

Now here was a really interesting film to discover. While the plot does sound like a poor man's CASABLANCA, here we see Mr. Ladd give one of his best and underrated performances he ever gave! Miss Young really does a stupendous job of being the "light of understanding" as Ladd's Jones does an complete 180 degrees. The film was made during the early years of World War II, so one can see this as a propaganda piece, but the acting and the directing (courtesy of John Farrow) really makes it a must-see rediscovery! The film was released to theaters by Paramount Pictures on April 21, 1943.

FIFTY ROADS TO TOWN (1937): Official synopsis: A man named Peter Nostrand (Don Ameche) hides out in the country to avoid testifying in his friends' divorce. A girl named Millicent Kendall (Ann Sothern) shows up and he thinks is a process server while she thinks he's a gangster. So do the sheriff and his men when they mistake Peter with kidnapping Millicent.

The film is another product of the times, featuring African Americans in a negative light. This time it's good ol' Stepin Fetchit stepping in as the lazy and mumbling hotel employee Percy. Both Ameche and Sothern have a lot of fun with their respected characters, and we see their feeling for one another bloom while in contrast to the unforgiving snow storm that has trapped them in the cabin in the woods. Director Norman Taurog made an amazing 181 films, dating back to the silent film era! His most famous films are the Elvis Presley ones: GIRLS! GIRLS! GIRLS! G.I. BLUES and BLUE HAWAII, but he also helped direct one of the most famous films ever! That would be 1939's THE WIZARD OF OZ! Yup, he directed several scenes for that film as well! This film was released by 20th Century Fox on June 14, 1937.

HI, GOOD LOOKIN'! (1944): An usher at a radio station studio pretends to be an executive at the station in order to help a pretty girl become a singer. That's all I can remember right now, but it was a pretty funny from what I can recall. I'll update this one later on once I can remember. I was pretty tired by this film, which was released by Universal Pictures on March 22, 1944.

And ladies and gentlemen, there you have it! My first Cinecon Film Festival since 2011. I had a blast at this festival, to see so many classic Hollywood films from the silent era, pre-code, and musicals! It was also nice to see a lot of my friends down here. Overall, I can't wait to come back again next year! And I encourage you all to make a trip down here to check out this awesome film event! To learn more about the Cinecon Film Festival, visit their website at www.cinecon.org.

Thanks for reading, and enjoy the show!
Posted by Philip Castor at 8:29 PM