It's been two years since I visited the El Capitan Theatre located in the heart of Hollywood. The last film I saw there was BEAUTY AND THE BEAST 3D. So while hanging out and walking around in Hollywood, my good friend and filmmaker Mo Whelan, her best friend Julia Lee decided to see the new Disney film PLANES 3D that was playing there. 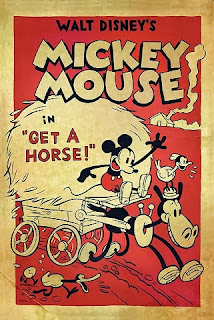 Before the feature, they screened a new Disney short film entitled GET A HORSE and it's a hybrid short: it's a black and white/color 3D hand drawn and computer animated film. It also features old archival voice recordings of Walt Disney portraying his famous creation from. The film has the whole gang back together as Mickey, Horace Horsecollar, and Clarabelle Cow have an ol' fashioned musical wagon ride while going to pick up Minnie. However things go bad when Peg-Leg Pete spoils their fun and tries to run them off the road. This is when the cool 3D computer animation kicks in and it's really amazing. The short was directed by Lauren MacMullan who, believe it or not, is the first woman director to solo direct an animated Disney film! Crazy, right? To get the cool retro 1928 look, the animators used ageing and blur filters to achieve this effect. The short was really a preview for us because it's going to be released with their  film FROZEN coming out this November 27th, so keep your eyes peeled for it! 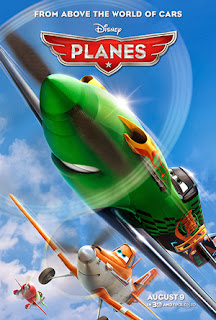 Set up as a spinoff in the same world as their CARS franchise, PLANES 3D is about a young cropdusting plane named Dusty (Dane Cook) who fantasizes about being a racer and competing in the famous Wings Across the World race. The problem: he has a severe fear of heights. But thanks to the coaching and training from his old friend Skipper (Stacy Keach), Dusty sets off to chase after his dream. But standing in his way is the treacherous and conniving 3-time winner plane Ripslinger (Roger Craig Smith) who plans to destroy Dusty's long time dream!

While the film looks like a Pixar film, it isn't, but it was co-written and executive produced by its creative officer John Lasseter. The film was directed by Klay Hall, who has many years of directing many television episodes of classic animated shows like The Simpsons, Family Guy, and King of the Hill.

I found the movie thoroughly funny, entertaining, heart warming, action packed, and contains a really strong and positive message that will no doubt inspire kids. Despite your shortcomings, never stop believing in yourself. You can achieve all your dreams by always believing in yourself. By doing that, you can inspire others all around you. I think that's a pretty good message to have for kids.

Oh, and the 3D effects were just awesome! This film deserves to be seen in 3D because it contains some very cool flying scenes that literally leap off the screen and right in your face! It's super cool!

In the end PLANES 3D has all the making of becoming another modern Disney classic! It's super fun for the whole family, so make sure you see this on the big screen! And don't forget to bring your flying goggles! 4 out of 5 stars!! Highly recommended!!


PLANES 3D is now playing at theaters nationwide, including at the El Capitan Theatre. To view showtimes, visit their website at http://elcapitan.go.com.

Thanks for reading, and enjoy the show!
Posted by Philip Castor at 8:34 PM