Since I was in Hollywood for the week, I decided to visit some of the more famous movie theaters. After all, what the hell else I'm gonna do, right? So, I walked on over to the newly re-named TCL Chinese 6 Theaters (formerly known as the Mann Chinese 6 Theaters) to see KICK ASS 2, the newest chapter in the franchise. 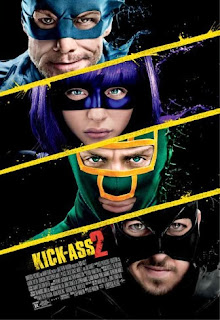 Dave Lizewski and Mindy Macready (Aaron Taylor-Johnson and Chloë Grace Moretz respectively) are back as Kick Ass and Hit Girl, partners in keeping their fare city safe from crime. But when Mindy's new adopted father Detective Marcus Williams (Morris Chestnut) forbids her to ever become Hit Girl again, Dave is forced to carry on his crime fighting duties alone, However, he's soon asked to join a brand new superhero team lead by Colonel Stars and Stripes (Jim Carrey). At the exact same time, Dave's old nemesis Chris D'Amico aka The Red Mist (Christopher Mintz-Plasse) returns as the newly renamed super villain: The Mother F*cker, and he's also put together a super villain team. It all leads to an all out war, but will Hit Girl return to join in on the fight?

The tone of the film is a lot darker than the previous installment. Sure there are still laughs found within the frames, but the overall tone is a lot darker. It almost feels like it leads towards recent superhero films like THE DARK KNIGHT RISES and this summer's mega hit MAN OF STEEL. Which in a lot ways is a good thing. The last thing you don't want to do is to just repeat the same damn thing over and over and over again, which is what a lot of Hollywood films are doing. Prime example is THE HANGOVER series. The sequels were just filled with rehash jokes from the first film. With this film, the characters grow, become more tangible, more realistic, therefore, the consequences are more extreme. Dave is faced with one of the biggest opponents ever and it cost him severely. Mindy's childhood was stolen from her father (see Nicholas Cage aka Big Daddy from the first film in case you missed it), so as the result, her new father is forcing her to abandon her old life to embrace the idea of what is it like to be just a normal, average teenage girl. Then there's Chris, who blames Kick Ass for killing his father, thus taking away his male role model and fueling hatred and vengeance towards his adversary.

The cast does an fantastic job of creating such a colorful pallet of colorful superhero characters. Of course Aaron, Chloë, and Christopher all do a...well...kick ass job of taking their respective characters to the next level. Jim Carrey is great in the film, bringing some darkness and some laughs with his portrayal of Colonel Stars and Stripes. Now I won't go into all the drama that Carrey has been in, regarding his refusal of supporting the film due to all the violence. But I will state that he was very good in the film.

For those of you out there that are pure comic book fans, you might not like the film because it is different from the comics. I might even say it's a lot different. In fact, I will like to go on record that the film's ending is TOTALLY DIFFERENT from the comic! I was shocked by that! There were numerous other differences that I won't go into because it'll take way too damn long! Now I'm not gonna gripe because that's part of life. Everybody knows that the book is always going to be different than the film. So for those out there who's been complaining, just get over it. Life goes on.

Overall KICK ASS 2 is a worthy entry into the series! It's an action packed, comic book thrill ride that will entertain the hell outta you! If you're craving for some superhero action, then this film is right up your alley! 4 out of 5 stars!! Highly recommended!!


KICK ASS 2 is now playing in theaters nationwide, including at the TCL Chinese 6 Theaters. To view showtimes, checkout their website at www.tclchinesetheatres.com.

Thanks for reading, and enjoy the show!
Posted by Philip Castor at 8:32 PM