Well hello there my fellow cinemaniacs and welcome to Day Two of my trip to the World 3D Film Expo III. Once again Mo and I went to the legendary Grauman's Egyptian Theatre to see another 3D film. This time we saw the classic Universal Monsters horror film THE CREATURE FROM THE BLACK LAGOON!! And in attendance at the screening was the film's star Julie Adams!! Oh yeah, I was excited!! 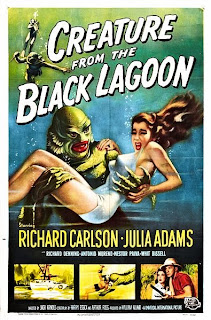 A small group of scientists go on an expedition down the Amazon River in search of a prehistoric creature that is half man and half fish.Upon arriving at the infamous Black Lagoon, they not only discover that the creature actually exists, but it also has his fishy eyes on female scientist Kay Lawrence (Julie Adams). Soon guns are being fired and the creature is captures Kay, but can her nerdy but good looking, scientist boyfriend Davis Reed (Richard Carlson) save her and stop the Creature from the Black Lagoon?

This was the last film of the famed Universal Classic Monsters. The film made such a splash at the boxoffice (pun intended) that it spawned two sequels. Of course, having the film made in 3D also helped push tickets, but it's one of the best classic horror films to come out of the paranoia 1950s.

Also having Julie Adams in that sexy white one-piece swimming around in the lagoon in 3D probably helped drive more tickets. At the screening that Mo and I were at, fans were whistling and making noise when Mrs. Adams took off  her robe and dived into the lagoon. While she had a double do all those cool underwater moves, the vision of seeing Julie in her one-piece probably made many pre-pubescent boys very, very happy. It sure did for me when I was a young lad!

After the screening, Julie Adams participated in a fun and informative Q&A session. Afterwards, she was signing copies of her autobiography "The Lucky Southern Star: Reflections from the Black Lagoon." Yours truly got a copy of her book signed as well as a HUGE reproduction of the film's poster! Yup, I LOVE Hollywood!!

CREATURE FROM THE BLACK LAGOON is a true horror film classic that is still beloved by fans from all around the world! It has been quoted written, and referenced all throughout pop culture! Almost 60 years after its release, there is no slowing down for this famous Gil-man!! So for all of you out there who have young kids that love horror films, get them turned on to this and watch them get scared and excited!! 5 out of 5 stars!! True Horror Classic!!


CREATURE FROM THE BLACK LAGOON is now available on both DVD and 3D Blu-ray. To purchase a copy, visit your local retailer or visit the Amazon website.

Thanks for reading, and enjoy the show!
Posted by Philip Castor at 8:40 PM