Phil attends a HORROR TRIPLE FEATURE at the Castro Theatre-September 30, 2013 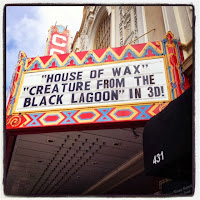 What a beautiful Saturday morning up in San Francisco. It's the perfect weather to......stay inside the historic Castro Theatre and see classic horror movies!! Yup, this is my definition of the "Perfect Saturday." So the theatre was showing two classics: HOUSE OF WAX and THE CREATURE FROM THE BLACK LAGOON, both in eye popping 3D! And as an added bonus, they were going to show a local documentary about the legendary KTVU Channel 2 television show Creature Features! And hosting this night of horror was none other than the host of Creature Features John Stanley! 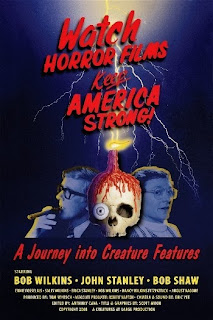 Around noon John came out and greeted the audience and told them they were for a real treat The theatre screened local filmmaker Tom Wynch's  2008 documentary WATCH HORROR FILMS, KEEP AMERICA STRONG: A JOURNEY INTO CREATURE FEATURES. The documentary chronicles the history one of the greatest local television shows of all time: Creature Features. The show ran from 1971 to 1984 and was Channel KTVU Channel 2's (located in Oakland, California) most popular programs. The show's original host was the late, great Bob Wilkins, who didn't look like your typical horror film host. While most were dressed up like vampires and ghouls and whatnot, Bob was dressed in a suit, wore thick black framed glasses, smoked cigars while sitting in a bright yellow rocking chair. Yup, he certainly looked different! All the while he was attracting fans every week. He hosted the show from 1971 till 1979 when he passed the torch to his good friend John Stanley, who had been appearing on the show since almost the beginning. John hosted the show from 1979 till 1984.

The film contains some really excellent interviews with both Bob and John, as well as with the show's producer Bob Shaw, Bob Wilkin's wife Sally and their son, and local filmmaker Ernie Fosselius, the creator of the hilarious STAR WARS spoof entitled HARDWARE WARS. Combining archival interview footage, new interviews, clips from the show, and behind the scenes footage, the film really captures the magic of the show. I grew up watching this and seeing this extraordinary film, it made feel like a was a kid again. 5 out of 5 stars!! Highly recommended for all Creature Feature fans out there!! You can purchase a copy of the DVD at www.garfieldlaneproductions.com.

Now the other two films screened I had already seen. Now in case you missed it, I saw both HOUSE OF WAX 3D and CREATURE FROM THE BLACK LAGOON 3D at the World 3D Expo III at the Grauman's Egyptian Theatre in Hollywood earlier this month. So I why did I see these films again? Are you kidding me?!? Really?!? Seriously?!? Remember who you are talking to here! I am a serious horror fanatic! I love watching horror movies! And since I was given the opportunity to see these two legendary films again, but this time see them on the HUGE Castro screen, I was not going to pass this up!! And yes, the films looked AWESOME in 3D on the Castro screen!! Yup, this was the perfect way to spend my Saturday!! Both films are available on Blu-ray 3D and can be purchased at your local retailer or on the Amazon website.

And there you have it! A great day of watching two of the greatest horror films of all time! There's a ton of cool films being shown here at the Castro Theatre, so if one day you find yourself in the city by the bay and you're looking for something fun to do, definitely come here and see a movie! It will change your life forever! To view the Castro Theater's film schedule, visit their website at www.castrotheatre.com.

Thanks for reading, and enjoy the show!
Posted by Philip Castor at 8:56 PM