Boy, did I luck out or what?!? While I was attending the Cinecon 49 Film Festival at the historic Grauman's Egyptian Theatre, I found out that starting on Friday, September 6th, the theatre would be hosting the World 3D Film Expo III!! How cool is that?!? Yup, you gotta love Hollywood! The festival runs for about two weeks and shows classic and cult 3D films! Back in the 1950s, that new fanged contraption called television was keeping people home and they weren't going out to the movies. One way to lure them back was the 3D craze. This festival celebrates this short lived fad and recreates that excitement of going to the movies and seeing a film in 3D! So of course Mo and I walked on over to the theatre on opening day to see the 1953 horror classic HOUSE OF WAX starring the iconic Vincent Price! 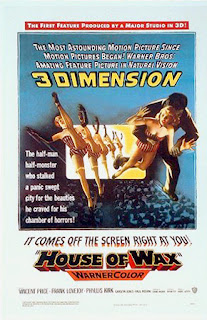 Set in 1890's New York, the film has Mr. Price portray Professor Henry Jarrod, a master wax sculptor whose amazing wax exhibit is unfortunately burned to the ground by his business partner, Matthew Burke (Roy Roberts), along with the professor! However, Jarrod does survive the fire, and 18 months later he opens a new wax exhibit catering to the macabre and showcasing both historical crimes and recent ones. Determined to recreate his Marie Antoinette masterpiece that was destroyed in the fire, Jarrod finds his inspiration in the form of the lovely Sue Allen (Phyllis Kirk), an friend of his new assistant Scott Andrews (Paul Picerni). Coincidentally at the same time of Jarrod's new House of Wax is opened, a series of deaths occur. First Burke is murdered and then Sue's friend Cathy Gray (Carolyn Jones) is found dead. And in Jarrod's exhibit, Sue notices that his Joan of Arc sculpture looks a lot like Cathy. Unfortunately, Jarrod and his deaf-mute sculptor Igor (Charles Bronson) have plans for Sue, and it ain't pretty!

Director André De Toth did a great job of really hyping the 3D gimmick by treating it like a gimmick, therefore setting up his shots to compliment the 3D effects which were used to perfection! A perfect example of this the "paddle ball" scene where a man standing outside the House of Wax is playing with a paddle ball and he has the ball come out to the audience! The effects worked today just as it did back in 1953!

Besides Mr. Price, the film boasts some new actors that would go on to become famous superstars. The obvious is Charles Bronson, who would be a huge star in the 1980's appearing in the DEATH WISH series. Though she's unrecognizable because of her blonde hair, Carolyn Jones would swap it for straight jet black when she took on the role of Morticia Addams in The Addams Family television show. She also appeared in the 1956 sci-fi classic INVASION OF THE BODY SNATCHERS.

The film was remade by Warner Brothers in 2005. The plot of that film had nothing to do with this film. It was part of the endless wave of horror remakes that Hollywood keeps pumping out. And it's very good at all. Well, seeing Paris Hilton killed in that film was pretty cool. But I digress.

The film was originally released Warner Bros. Pictures on April 25, 1953. When it was sold to television, it was shown in 2D. Soon, it was released on VHS and DVD, but still only in 2D. Finally, it was announced that the film would be released on Blu-ray in 3D on October 1, 2013, just in time to celebrate its 60th anniversary!

The HOUSE OF WAX 3D is a true horror classic and one of Vincent Price's most popular titles! In this day of age where the gorier the better, it's awesome to see this film once again prove that they did it better back then! One of my all-time horror favorites! 5 out of 5 stars!! Highly recommended!!


The HOUSE OF WAX 3D is now available on 3D Blu-ray from Warner Home Video. To purchase a copy, visit your local retailer or visit Amazon.com to buy one today!

Thanks for reading, and enjoy the show!
Posted by Philip Castor at 8:37 PM