After my awesome trip to Hollywood, I was ready to head back to my favorite theater chain: The Camera Cinemas! And what luck, they were showing the new horror film INSIDIOUS: CHAPTER 2, the second installment of the series directed by James Wan. So I went to the Camera 12 in downtown San Jose to see this fright flick! 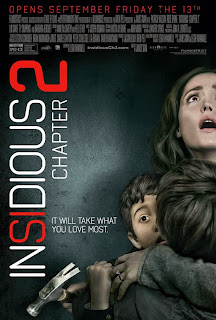 The film's official synopsis: The haunted family Lambert have moved into the home of dad Josh's (Patrick Wilson) mother Lorraine Lambert (Barbara Hershey), after he plunged into the eerie netherworld The Further to pluck back his son Dalton (Ty Simpkins) from the clutches of the infernal Mother Crane. But wife Renai (Rose Byrne) believes that her husband did come back and thinks something else has possessed Josh. Now they seek to uncover the mysterious childhood secret that has left them dangerously connected to the spirit world.

James Wan has done his homework, lifting the good ol' thrills and chills from classic horror films from the past, specifically from Universal and Hammer. The movie continues to showcase his ability to really creep the audience out with simple things such as eerie sounds, long pauses of silence, and scares that will get under your skin. Much like the first film and as with THE CONJURING, Wan proves that he has what it takes to scare the hell outta you.

Once again the entire cast turned in terrific performances, leading with Patrick Wilson, who makes his third appearance in James's films. The man is to James Wan as Robert De Niro was to Martin Scorsese. Just a solid actor who really goes the extra length to pull some great scares as well as show sympathy. Rose Byrne continues to show that strong and intelligent women in horror films are still alive and well. Also returning is the beloved Lin Shaye as the medium Elise Rainier. And as another fun treat, the film's co-writer Leigh Whannell returns as the character Specs.

Words cannot begin to describe just how creepy and scary the film is. However, I think THE CONJURING was a bit more scarier, mostly I think was because that film was based on a real couple and incident. But this shouldn't discourage you into not seeing the film. Unlike most horror sequels, the script is solid, the acting is fantastic, and the production value is top notch!

Overall, INSIDIOUS: CHAPTER 2 is a worthy entry of the franchise, and sure to satisfy all you fans of the first installment! Plus, horror hounds will also appreciate the film as it proves that you don't need excessive blood and gore to get the audience terrified. All you need are some bumps in the night. 5 out of 5 stars!! Highly recommended!!


INSIDIOUS: CHAPTER 2 is currently playing in theaters nationwide, including the Camera Cinemas here in the Bay Area. To view showtimes, visit their website at www.cameracinemas.com.

Thanks for reading, and enjoy the show!
Posted by Philip Castor at 8:48 PM