After seeing INSIDIOUS: CHAPTER 2 over at the Camera 12 in downtown San Jose, I saw they were also showing the indie horror comedy DEAD BEFORE DAWN 3D! And since I just saw some awesome 3D films down in LA last week, I was more than excited to keep my horror and 3D movies theme going! 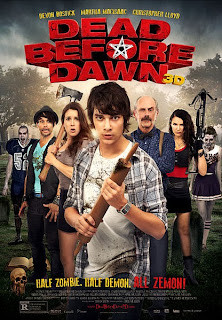 The film's about a shy college student named Casper Galloway (Devon Bostick) who watches his grandfather's (Christopher Lloyd) occult shop while he's away. But when a group of Casper's friends accidentally break an ancient urne, they unleash a horrible zombie-demon ("zemon") curse and everyone who makes eye contact with them kills themselves. Then they come back as a zemon, hellbent on killing Casper and his friends by giving them hickeys. To add even more pressure and stress, they must break the curse before sunrise or else all the people in their small town will stay as zemons.

The movie was shot in 20 days in and around the Niagara Falls area of Canada in 3D. It was made by the dynamic duo of director/producer by April Mullen and writer/producer by Tim Doiron. The pair have gained a lot of notoriety due to the fact that 1) It was Canada's first live-action 3D feature film. 2) That it was also the first 3D film made outside of the studio system. 3) Mullen became the youngest and the very first female to direct a stereoscopic 3D film. So lookout Hollywood cause Canada is creeping up behind you!

Bostick is most famous for his role as Rodrick Heffley from the DIARY OF A WIMPY KID Trilogy. He's also appeared other films such as SURVIVAL OF THE DEAD, SAW IV & VI, and THE ART OF THE STEAL. Martha MacIsaac, who plays Bostick's love interest, as been in such films as SUPERBAD, THE LAST HOUSE ON THE LEFT remake, and THE THAW. Of course, Mr. Christopher Lloyd needs no introduction. The man's a legend!

I found the film to be really funny and entertaining; never taking itself too seriously. It contains the perfect blend of big laughs and big scares. The entire cast does a great job of bringing their respected characters to life and the directing and production values are amazing given the film's low budget. But this proves that the independent world can produce some interesting films that can rival those coming out of Hollywood.

DEAD BEFORE DAWN 3D is a hilarious, gore-soaked fun-filled ride full of laughs and bloodshed! If you're a tweener and are sick and tired of all the TWILIGHT ripoff crap that's been plaguing your local theater, give this film a try. I think you'll be pleasantly surprised on how awesome the film is! 4 out of 5 stars! Recommended this Halloween season!


DEAD BEFORE DAWN 3D is still playing in select theaters, and it was just released on DVD. To purchase a copy, visit your local retailer or visit the Amazon website.

Thanks for reading, and enjoy the joy!
Posted by Philip Castor at 8:50 PM