Phil is quoted in the new advertisment for the indie film THE CITIZEN-August 9, 2013 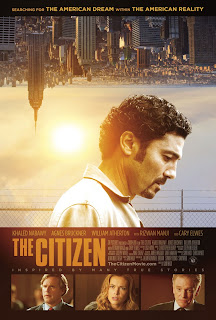 Last Friday while at my meeting at the office, my good friend and fellow blogger Jason Wiener (Jason Watches Movies) posted something very special on my Facebook wall. Now before I go any further with this story, let me take you back to March of this year. It was Day Ten of the Cinequest 23 Film Festival and I had the privilege to see the amazing film entitled THE CITIZEN, starring Khaled Nabawy, Agnes Bruckner, Cary Elwes, William Atherton, and Rizwan Manji. In case you didn't get the chance to read it, here's what I said in my review:

"The second film I saw was the political drama THE CITIZEN. The film focuses on Ibrahim Jarrah (Khaled Nabawy), an Arab immigrant who five years ago won the green card lottery which allows him to became an American citizen. He arrives in America on September 10th, 2001. On his first day he's held at the airport for security reasons, then he checks into hotel where the meets Diane (Agnes Bruckner), who hides her from her abusive boyfriend. The two strike up a friendship and she shows him around New York. Then the next day, the world changes. He is then detained for six months by the government for no reason other than he's from the Middle East. Once released he's faced with racism, his friends being beaten and nearly shot; in short he's forced to see the ugliness in America, the country that he still wishes to be a citizen of. Five years later, Ibrahim receives a letter that threatens to take away his dream of becoming an American citizen.

What I loved about the film that it doesn't shy away from the themes it's addressing: racism, fear, intolerance, injustice, but more importantly, never giving up on your dreams. It's very easy to take things in life for granted, especially if you were born here. Those who come here have to try so much harder than I do, and are faced with so many obstacles that it's staggering. This was the feature film debut by director Sam Kadi, who did a tremendous job of telling this story that was "inspired by many true stories." The entire cast turned in outstanding performances, making this film a must-see!"

So now back to my story. Jason posted on my wall an advertisement that the filmmakers had posted on Facebook. It was a screen shot from the film featuring Elwes, Bruckner, and Nabawy, and right there in the middle of this shot was MY QUOTE!! I couldn't believe it!! This was such an honor!! And again in case you didn't get to see it, here it is!! 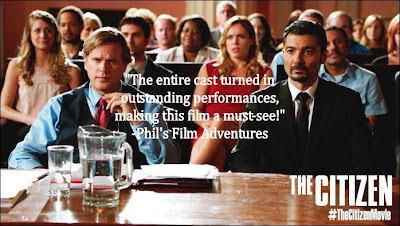 I am so honored to have my quote attached to this prestigious and incredible film! If for some reason you have not seen this yet, I strongly encourage you all to see it! This is what I love about independent films! They take chances and break the constraints of what a movie should be. They inspire you, they challenge you, they are literally works of art that deserve your time and attention! If you're tired of seeing the barrage of brain dead schlockbusters coming out of Hollywood (and don't tell me you aren't), do yourself a favor and see this film, as well as other indie films. You'll thank me later for this!


THE CITIZEN was one of my favorite films at Cinequest 23 and it was nominated for the Audience Choice Award! The film has played at several other film festivals, such as the Tri Media Film Festival, the Hollywood Film Festival, and the Abu Dhabi Film Festival. This past May the film was picked up for distribution by Monterey Media! Look for the film to be playing in select cities nationwide this summer and then on DVD and VOD in October. To learn more about the film, visit www.montereymedia.com (you can also see my quote there as well). Also don't forget to follow the film on Facebook and Twitter!

Thanks for reading, and enjoy the show!
Posted by Philip Castor at 8:52 PM