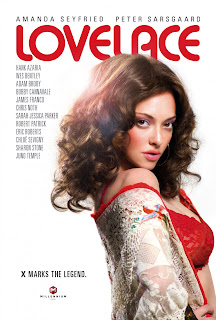 The film actually opens on a ravaged Linda Lovelace taking a polygraph test to prove that her story is authentically correct. At the end, her book Ordeal is released and she's on the old Phil Donahue Show telling her sad story and survival. The movie ends with a happy like ending, but in reality, it wasn't even like that. After she divorced Chuck, in 1974 she married Larry Marchiano and had two children: Dominic and Lindsay. After she divorced him in 1996, she claimed that Larry was an alcoholic who was verbally abusive to their children and was violent towards her. According to those who knew her personally, Linda always played the victim, never really taking any kind of responsibility on her part.

The film was made by directors Rob Epstein and Jeffrey Friedman, who are more famous for their award winning documentaries such as THE TIMES OF HARVEY MILK, THE CELLULOID CLOSET and PARAGRAPH 175, along with the Allen Ginsberg biopic HOWL. While the film was entertaining, I felt that it was two-dimensional, filled with caricatures of those involved with DEEP THROAT, and Linda was somewhat under-developed. Now Amanda's performance of Linda was excellent, bring the iconic porn star to life is no small feat giving the complexity of the character, but it felt as if there was more to her that was left out. Granted, the film is told from Linda's perspective, but it left out a lot of details of her life.

The main focus of the film was her relationship with the abusive Traynor, which was played with such intensity by Sarsgaard. His performance was unbelievable. It's a well known fact that Chuck Traynor was the biggest schmuck and asshole to have ever lived, but seeing him in the movie only establishes it even more.

Also turning in memorable performances are Robert Patrick and Sharon Stone as Linda's parents John and Dorothy Boreman. However, the caricatures I mentioned earlier were by Hank Azaria's performance of Gerry Damiano and Adam Brody's Harry Reems, the other star of DEEP THROAT. I was appalled by their portrayals of both Gerry and Harry. They made them look like idiots and lacked any real personality! In real life, Harry was a smart, sweet and funny guy who almost went to jail for acting in the film. Gerry was very intelligent who after DEEP THROAT went on to make the other classic adult film THE DEVIL IN MISS JONES, which was owed more to European art house films. And like most filmmakers of that era, Gerry never made any money from his films, thanks in large part of the industry being controlled by the mob. These two men also paid a high price of fame as well, and I felt they should've been portrayed my realistically and honestly.

The film drew quite a bit of controversy before it was even released. On January 22nd of this year, the AVN (Adult Video News) website ran a story about how Harry Reems was unhappy that, "the filmmakers didn't see fit to consult him while writing the script." Then on August 8th, AVN ran another story about "the lawsuit that Arrow Productions owner Raymond Pistol has filed against The Weinstein Company and several other corporate and individual defendants for their alleged infringement of Arrow's copyrights and trademarks to the classic 1972 adult movie DEEP THROAT and its star, Linda Lovelace."


LOVELACE is currently playing in theaters nationwide, including the Camera Cinemas here in the Bay Area. To view showtimes, visit their website at www.cameracinemas.com.

Thanks for reading, and enjoy the show!
Posted by Philip Castor at 4:08 PM