Hello again everybody and welcome to the third and final day of the CAAMFest San Jose Film Festival at the Camera 3 Cinemas! Hard to believe it's all over! But before I say goodbye, let me talk about the last four film I saw on Sunday! 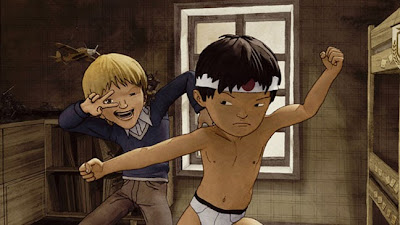 The first film I saw was the French-Belgian export APPROVED FOR ADOPTION, a true story/narrative/documentary/animation movie. It's about a 45 year old comic book artist named Jung who travels back to Seoul, Koera for the first time since he was abandoned there by his mother at five years old and was found by a policeman. He was just one of thousands of abandoned Koreans that was adopted after the war. He eventually was adopted by a loving French family. Told in animated sequences conveying his childhood, he see Jung's early years unfold as he struggles with who he is and his search for an identity.

The movie is based on a graphic novel by Jung and was directed by Laurent Boileau and Jung. This was a very personal film to watch. We have all at one point in our lives struggled with an identity crisis that leaves us questioning everything that we do. Jung was brave enough to first put it in comic form, and then translate it for the big screen. A very brave move on his part. The film was thoughtful, poetic, and amazingly animated that pulls on your heartstrings. A wonderful work of art that Jung should be very proud of! To learn more about the film, visit its official website at www.couleurdepeaumiel-lefilm.com as follow the film on Facebook too. 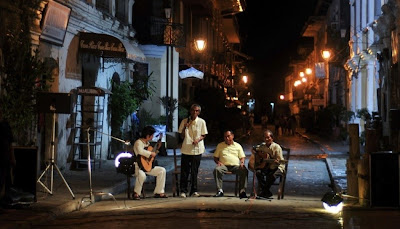 Film number two was the documentary HARANA, the long lost art form of when a Filipino man would serenade to the woman he was in love with under her window. Returning home to the Philippines for the first time in over 12 years, classically trained guitarist Florante Aguilar sets out to find the last three remaining masters of the Harana: Celestino Aniel, Felipe Alonzo, and Romeo Bergunio. Together, these four men set out to revive this forgotten music by recording an album and going on tour; to once again bring the Harana music to the people.

I have never heard of Harana music before, and now after seeing the documentary, I can't wait to tell all my friends about it, and the film as well! Director Benito Bautista and Florante did a tremendous job of not only finding the original Harana keepers, but do get them in the film and in the studio to record this incredible music! This film should be required view for music lovers worldwide! It's as if Florante and his friends serenade us though the duration of the film! It's truly a captivating film to watch!

For those of you living here, the film will have several more Bay Area screenings so make sure you check this film out. To learn more about the film and the other screenings, please visit www.haranathemovie.com and check out its Facebook page. 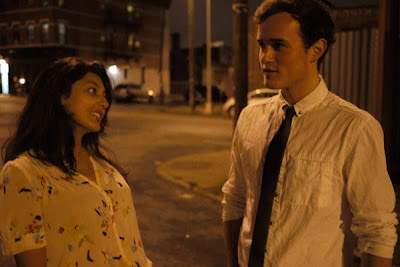 The third film of the day was the crazy and eccentric New York based film LET'S BE OUT, THE SUN IS SHINING. A shy, twenty-something, Indian-American woman named Diya (Lipica Shah) meets and falls for good looking but jerk Brooklyn bartender Paddy (Scott Lyman). Believing everyone is disposable, he ditches her to Diya to and runs away to Miami with smoking hot blonde cougar Sophia (Madeleine James). Feeling rejected, she befriends a small group of struggling actors and musicians in Bushwick, Brooklyn, much to the disapproval of her protective older brother. During this time she explores who she is, her feelings and thoughts on life and love, and what's important to her.

Director Bornila Chatterjee captures the raw energy and youthful rebellion of New York as we watch Diya come out of her shell and becomes a totally different person at the end of the film. The combination of a good script with hand held cinematography really sets the film apart and gives it its own distinctive personality. The entire cast was great but Lipica Shah was amazing in the film, bringing a sense of innocence and strength to her role as Diya. Really a terrific performance! At the 2012 New York Indian Film Festival, the film won the Audience Choice Feature Film Award and Lipica Shah also received a Best Actress nomination!

After the screening, Bornila Chatterjee came up on stage and gave a fun Q&A session with the audience. You can follow the film on its Facebook page and Bornila on Twitter. 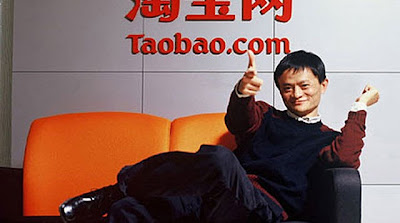 The fourth and final film of the festival was the documentary CROCODILE IN THE YANGTZE, which tells the story of the man known as "Crazy" Jack Ma, a former school English school teacher who went on to become China's first Internet entrepreneur. The documentary explores the early years of his company, the Alibaba Group, and his fierce battle with the powerful US company eBay for dominance in China.

The film was written, produced, and directed by Porter Erisman, who was one of Ma's first employees and had front row seats of this rags t riches tale. From its humble beginnings in Ma's small apartment to a massive company employing 16,000 staff, Porter documents Ma's story from culling nearly " 200 hours of archival footage filmed by over 35 sources between 1995 and 2009." What's really remarkable was that Ma gave Porter his blessing to make the film, showcasing some personal moments and stories that most CEOs wouldn't allow. But by doing this, Porter's film shows the real Jack Ma, a regular human being who had a dream and dared to chase it.

Porter was in attendance at the screening and conducted a Q&A with the audience. To learn more about the film, visit the official website at www.crocodileintheyangtze.com and also follow the film on Facebook.

And that ladies and gentlemen is a wrap of the very first CAAMFest San Jose! I had a blast this weekend and I cannot wait for next year's festival! So if you would like to learn more about CAAM, their mission, and how to make a donation, please visit their website at caamedia.org.

Thanks for reading, and enjoy the show!
Posted by Philip Castor at 7:43 PM