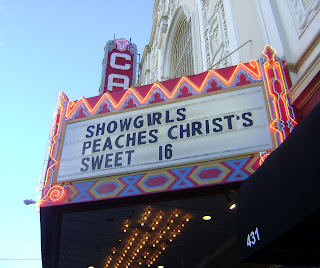 This past Saturday night at the historic Castro Theatre I attended my very first Sweet 16 celebration! And no, it wasn't one of those annoying, silly, pink frilly parties with sixteen year old girls talking about Justin Beiber all night. Oh no! This was the 16th Anniversary screening of the cult classic SHOWGIRLS hosted by the one and only Peaches Christ!! And returning to San Francisco was none other than Rene Riffel!! Joining me on the momentous event was my very good friend and make up extraordinaire Michelle Snyder. Upon arriving at the theatre, we saw an enormous line that wrapped all the way around the block! The show had completely sold out, so I knew we were for a one helluva party!

Since this was my birthday weekend, Michelle bought me my ticket for tonight's festivities. We had VIP passes, which meant we were let in early, and we also had two free drink tickets. Now usually I don't get this drunk, but bless these bartenders! When Michelle and  I asked for four vodka cranberries, this is how they made them: 85% vodka and 15% cranberry juice! By the time I finished my first drink, I was already buzzing. By drink number two, I was drunk. By the third drink, I was pretty much wasted! Oh what fun I had! Plus I was also getting drunk off the electricity from the crowd! The front lobby was packed and there wasn't one empty seat in the theatre! The crowd was getting rowdy, people were screaming, I was getting wasted, and by 8 o'clock rolled around, the show finally began!

Like last year's event, the show opened with Peaches (once again as the evil Crystal Christ) coming out of that iconic volcano and she dancers with her ladies, then Rena is carried though the theatre and she leaps onto the stage, with the audience screaming their lungs out. But that's where the similarities end. Right away, Peaches accuses Rena of trying to steal the show from her like last year. Then the show shifts gears as we see Peaches having dinner in the posh restaurant like in the film with Lady Bear. Then both begin to eat a can of dog food!! Now, I don't know whether or not they were eating real dog food, but they sure acted like they were! It was pretty damn gross, and I loved it! Once again the preshow was excellent!

Afterwards Peaches held the annual contest for best costume. At the conclusion of the that, it was time for the "Night of a 100 Lap Dancers" to commence! Members of the audience had to sign up to participate in the event, to which she called up every single one of them. Her Showgirl Dancers also helped out as well. So people who had purchased a large popcorn received  free lap dance, and that's when all hell broke loose! People were climbing all over seats, gyrating pelvises where everywhere, old people and young were giving it their all as the orgy of lap dancers continued for several minutes. By this time I was just completely hammered and I was having fun! Michelle was laughing so hard. Remember, this was her first time at SHOWGIRLS, so I don't think she knew exactly what she was going to see! But she was having a ball!! After it was all over, it was time for the movie to begin!

The film stars Elizabeth Berkley as Nomi Malone, a young and beautiful drifter who arrives in Las Vegas to become a dancer, but ends up as a stripper at the aptly named Cheetah Club instead. She meets a seamstress from the Stardust Hotel named Molly (Gina Ravera) and soon the two become fast friends. When Nomi encounters a chance meeting with the star of Molly's hotel show Goddess Cristal Connors (Gina Gershon), she manages to get an audition to be on their chorus line. Soon life becomes more complicated as Cristal sees Nomi as a threat to her and to her career as the star of the show, which creates a love/hate friendship between the two. Also Nomi sets her eyes on Cristal's manager and part time lover Zack Carey (Kyle MacLachlan) and the two of them become lovers as well. Eventually Nomi wonders if all of this stardom is worth the price.

Right when the film began, Michelle and  I made my way back up to the mezzanine and waited in line to meet both Rena and Peaches. I bought some pics and posters for both of them to sign. Michelle had Rena sign her SHOWGIRLS 2 DVD! After the movie, Michelle and I had brinner (breakfast for dinner) over at Orphan Andy's. Overall, we had an awesome time that night!

Another fantastic Peaches Christ show has come and gone! But don't you fret my friends! There's plenty more fun ahead! Her next show is GREY GARDENS and it will be on Saturday, October 12th at the Castro Theatre! So make sure you come check that show out! And if you are interested in becoming a fan of Peaches Christ, or want to view her upcoming shows, visit her website at http://peacheschrist.com. To view the Castro Theater's film schedule, visit their website at www.castrotheatre.com.

Thanks for reading, and enjoy the show!
Posted by Philip Castor at 11:22 PM